The Handcuff King's blog: The inescapable Loop the Loop 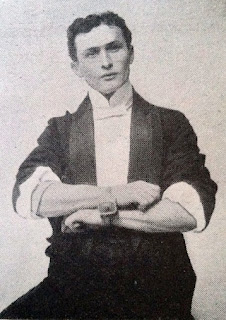 In 1900 a unique Vaudeville act took Europe by storm. Born of the circus in the 19th century, no one had ever seen anything like it on a Music Hall stage. The sensation spread from England to France and Germany and even traveled into Russia in 1903, defying police and garnering headlines at many stops. Imitators abounded, many pilfering the original act's very name.

Sounds like I'm talking about Houdini, doesn't it? But I'm not. I'm talking about the "Loop the Loop," a Vaudeville sensation that paralleled Houdini's own rise to fame and oddly seemed to follow him from country to country. Of all the acts Houdini discusses in his Dramatic Mirror column, none get as much attention as the various "Loopers" and their misadventures. It was the act he couldn't escape.

So what is a Loop the Loop? It's best described by the poster below advertising Diavolo, who was one of the most famous Loopers of the day. As you can see, a performer would ride a bicycle around a large wooden loop to loop apparatus. Some would perform the loop on roller skates and even in a car. What's shocking is just how many artists were injured and even killed performing the hazardous stunt 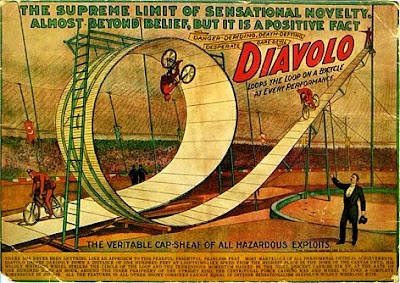 What follows are several excerpts from Houdini's columns which discuss the Loop the Loop. Gathered together, these provide a nice history of this unique turn of the century sensation, which may have helped shape Houdini's later career.

Manchester, Nov. 23, 1902 - Diavolo is being eagerly sought for by mangers on the Continent as all the riders that were going to do the "loop the loop" have lost their nerve and none of them will attempt it. Mrs. Barber [Diavolo's manager] will have to go to Berlin and France and scoop in the marks and francs.

Berlin, Feb 21, 1903 - I arrived here from Amsterdam and found things in the theatrical business, especially in Berlin, are booming. Every theatre in Berlin is playing to sold out houses. At Circus Schuman, Mrs. Barber's "Loop the Loop" has packed them in for the last two months, and is prolonged for the month of February. Nothing has ever drawn like the "Loop the Loop." Herr Director Busch, of Circus Busch, has had a "loop" built and for the last three months has looked for some one to ride it. Up to the present time no one has been successful, although every morning is devoted to trail performances. One German racing man named Mindner has tried it five times, but has come to grief every time. They are now reconstructing the "loop," and Busch hopes to have the trick in good running order in a few weeks

Cologne, March 25, 1903 - The Isoias Freres have again shown that the are lucky managers. Having engaged "Loop the Loop" from Mrs. Barber, they were busily billing Paris as it has never been billed before, and they have actually been compelled to raise the roof of their already high theatre Olympia. What was their astonishment to find one day, to their great consternation, that Dupre and Bornea, of the Casino de Paris, had also engaged a Loop the Looper, and were also busily engaged in letting Parians know the fact. Naturally this aroused great excitement and it was with great pleasure that both managers announced that they would positively have the only Loop the Looper to do the act in Paris. It was announced that the Mephisto Loop the Loop at the Casino would be stopped from trying to break his neck by Diavolo, who claimed through his mangeress, Mrs. Barber, that the Loop was patented. But the papers wanted to know how you could patent the Loop when it was already done in 1856, and said that you could not patent the Loop an more then you could a twist double somersault or a twister. Be that as it may, on the first attempt by Mephisto, he had an accident and smashed his wheel, and Mr. Police stepped in and stopped the show. But not so with Diavolo. 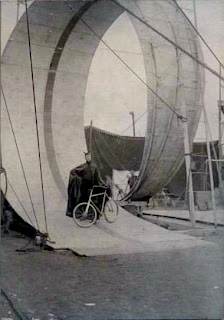 Berlin, March 31, 1903 - Since writing my last letter regrading Paris and the "Loop the Loop" affair, Mephisto has again started in to work. He was stopped by the police, who were told that the act was patented, etc., but after several nights had passed Mephisto merrily risked his life just the same as Diavolo, who is drawing large houses at the Casino, while at the Olympia big business is also the rule. It seems that the people go first to see one and then the other "looper" as they wish to see which comes nearest to having an accident.

Berlin, April 12, 1903 - I have heard that an act called "Sloping the Slope" has opened in Paris. It consists of a man sitting down, and doing a kind of "Loop the loop," while in this position. Up to the present moment he has not received any medals for courage.


Interestingly, when Houdini traveled to Russia in the summer of 1903, the Loop to Loop followed...

Moscow, May 12, 1903 - Weston has brought a "Loop the Loop" act here and open at Aumont's inside of fifteen days, provided that the police will not interfere. News has reached Moscow that a young man was killed in Paris while giving a trial show, riding the loop, which will make it risky for any one to open up here, especially as I have heard that "Loop the Loop" will not be permitted.

Moscow, May 31, 1903 - Looping the Hoop opened last last night at Aumont's, and the police allowed four performances to be given, after which they were forbidden, and will have to move to St. Petersburg, where, I think the police will permit this "Hoop," for they allowed Madame Barber's "Loop" to work. Gifford's "Hoop," with which he was so successful in Berlin, and has so many uncertain first nights in Leipzig, has opened very successfully at the Hippodrome in London. Loop the Loop riders are again becoming scarce, as the late record of accidents is showing plainly that to ride the "Loop" successfully you race with a rider named Death, and there is no telling when something will happen.

Moscow, June 1903 - The latest sensation which is promised to Russia is the "Loop the Loop on Roller Skates," but I hardly think the police will allow it.

Moscow, July 19, 1903 - Emil Nolsett is drawing packed houses as Mephisto, King of Loopers, and with his loop the loop is going to tour the provinces of Spain. Barber, with his loop, is touring the South of France, and is also making a fortune. The looper Browns in Buda Pest was badly injured at Circus C. Sidoli last week and there is little hope of his recovery. Rambler, who had advertised a "Hoop the Hoop," failed to make his hoop work, and the young lady that he had engaged to ride the hoop sued him salary and was given the verdict.

Novgorod, Russia, Aug 8, 1903 - In Mannheim, at the Theatre Saaibau, there is a "Loop the Loop" being advertised and as far as I know the theater the only place that a "Loop the Loop" could be placed would be on the roof. 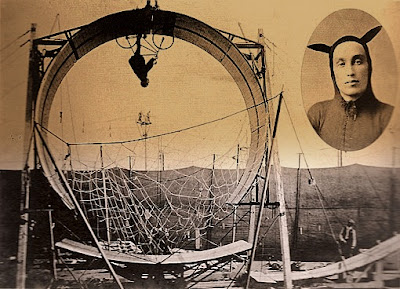 Holland, Sept 18, 1903 - In Frankfort A. M., a "loop the loop" was going to be delivered to the public, not the common way, with a bicycle, but with a man and woman seated on a tandem. At their first attempt they went around the loop, but the man, who was on the front seat and whose duty it was to steer the tandem safely around, must have forgotten to attend to affairs, for when they had completed the circuit he managed to steer the wheel out of the loop, and from what I hear they both are going yet. The lady recovered her senses the next day, and the gent has not recovered yet, as he says that he will try it again as soon as he finds a lady with the required nerve to make a second attempt. The first lady says that she is not taking any more chances, thanks. She is cured.

Dresden, Oct 14, 1903 - Noisett is touring through Spain with his own company, and the crop of Loopers is as large as ever. To give you an idea of how cheap Loop riders have become in Europe (outside of playing on percentage), you can obtain a Loop and rider for less than one-third of the price it cost at the time it was the rage. A Hoop the Hoop can be had for less than 300 marks a night, and two months ago they were paid 800 marks. So as, roughly counting, 420 marks make $100, you can easily figure out how much you can get risking your neck. Barber and Diavolo are still the highest paid of the entire lot, and rumor says that Madame Barber has collected the largest of the "filthy lucre" in connection with this device.

London, Aug 30, 1904 - Morock, a trick cyclist, killed himself while trying to throw a somersault after coming out of the Loop the Loop. He had some kind of an arrangement made which would make him throw a somersault after leaving the loop. He went after the trick, was carried from his apparatus covered with blood, and died a few days after. Two of the boards on the loop broke and he was thrown twelve feet into the air.

Liverpool, June 4, 1905 - All Europe is waiting to hear what the judges will say in Paris to Dupree and Berney, managers of the Casino de Paris, for permitting Mile. Randle to do the "Somerset of Death" in a motor car. It seems her uncle forced the girl to do the leap, and some people are going to prove that she tried to jump out of the window the evening before she was killed. From what the Paris papers say it looks like some one will be severely punished; at any rate, this will be the death-knell to all hazardous performances in France.


Indeed, it appears the Paris case did help put an end to death-defying loop the loops acts. Or it's possible that by 1905 the public had simply had their fill. As to it being "the death knell of hazards acts" in Vaudeville...well, three years after penning this last entry, Houdini threw off the mantle of "The Handcuff King" and became Houdini The Death Defier when he introduced his Milk Can escape.

I can't help but wonder whether his early years playing alongside the death-defying Loop the Loop had anything to do with his decision.

Coming next: A night at the opera and a day in Liverpool.
Written by John Cox at 10:56 AM