The May 2013 issue of MAGIC Magazine features an article by Bill Winters that takes us inside the extraordinary Houdini collection of Arthur Moses. The article includes photos of Arthur's magnificent Houdini Room in his home in Texas (I'm honored to say I've worshiped in this temple), as well as covers of Houdini foreign editions that I guarantee you have never seen. Here's a tease: 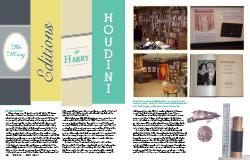 THE MANY EDITIONS OF HARRY HOUDINI

Arthur Moses not only collects Houdiniana, he specializes in Houdini in print -- every edition of Houdini literature in print. Plus, Moses shares the story of the complete known Houdini voice recordings, along with a transcript.


The article about the complete Houdini voice recordings is written by Arthur himself and includes the full transcript. You'll remember Arthur revealed the complete recordings last year at the Magic Collectors Weekend in Chicago.

You'll also find coverage of Penn & Teller's recent star ceremony on the Hollywood Walk of Fame, Milt Larsen's latest installment of "50 Years at the Castle", and much more.

The May issue of MAGIC is available now from the official MAGIC Magazine website. 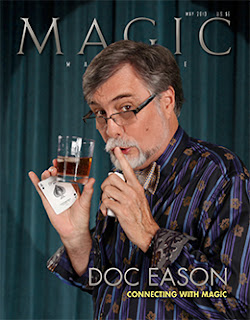