No joke! Never before seen footage of Houdini and Marie Blood

It may be April Fools Day, but this is no joke. Recently our friend Jon Oliver -- the man who sleeps in Houdini's bed -- shared with me a remarkable 40 second fragment of film showing Houdini and Haldane of the Secret Service co-star Gladys Leslie cuddling and cooing over a small child with a puppy. The child, it turns out, is none other than Houdini's niece, Marie Hinson, who many Houdini buffs came to know as Marie Blood later in life. While there are photos of Houdini with young Marie, this is the only film footage that is known. Wild indeed! 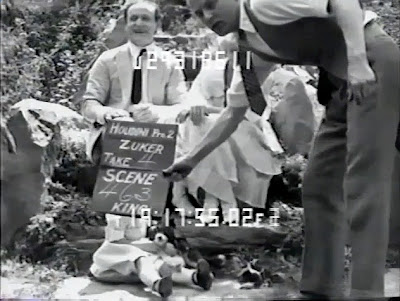 But this footage is fascinating even apart from Marie. What is this exactly? It could just be Houdini, Leslie, and Marie relaxing on the set of Haldane having some fun before the camera. But I think this is much more. The head of the footage also contains a slate. This tell me this was shot specifically for the movie and looks like it could have been an alternate or even lost original ending. Terror Island had a similar ending; there Houdini and co-star Lila Lee are brought together for the final screen kiss by a small child. As it exists now, Haldane ends rather abruptly with a still photo of a ship presumably bringing Houdini/Haldane back to the United States.

The slate is also curious in that it shows the director as "King." This is almost certainly Burton King, director of The Man From Beyond. Houdini is credited for directing Haldane, but this shows that King was involved at some point. That's a bit of a game-changer. The name Zuker refers to Frank Zuker, one of two cameramen on Haldane. Note that the slate calls the film "Houdini Pro 2" (Production #2).

But enough of my yapping. I know what you want, and Jon has graciously allowed me to post the full footage here. So click below and watch film of Houdini and Marie Blood that has never been seen before (sorry for the time code). Action!

Marie Blood retained a handful of vivid memories of her "Uncle Harry" and spent the last decades of her life touring and talking about Houdini and "Aunt Bess." Marie also penned a delightful afterward in Ken Silverman's Houdini!!! The Career of Ehrich Weiss. I had the pleasure of meeting Marie in 1995, at which time she shared some family secrets. Marie Blood passed away in 2004 at the age of 87.
Written by John Cox at 1:33 PM

Email ThisBlogThis!Share to TwitterShare to FacebookShare to Pinterest
Tags: [History], 1921, Family, Haldane of the Secret Service (1923), Jon Oliver, Marie Blood, Movies, The Man From Beyond (1922), Video