Two long out-of-print Houdini booklets by Roger Woods and Brian Lead, Houdini The Myth Maker (1987) and Harry Houdini Legend & Legacy (1993), are now available as PDF downloads for $12 each from Lybrary.com. 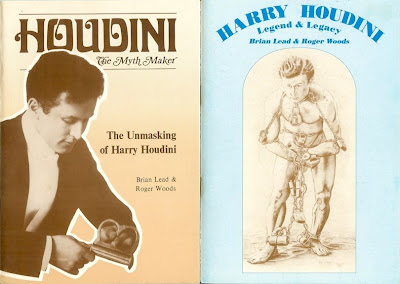 Both books provide excellent examinations of specific episodes and challenges from Houdini's career. I would recommend Legend & Legacy in particular as it contains rare photos of Houdini exposing the Mysto coffin escape, and also shots of him from a 1920 The Illustrated Chronicle climbing to the top of a castle in Newcastle and hanging from the parapet (which recalls the scene in Death Defying Acts when Houdini climbs atop a parapet in Edinburgh).

Thanks to Eric Fry for the tip.

UPDATE: Looks like printed versions of the books can still be purchased at rogerwoodsmagic.co.uk.
Written by John Cox at 5:52 PM