The Handcuff King's blog: Death of a rival 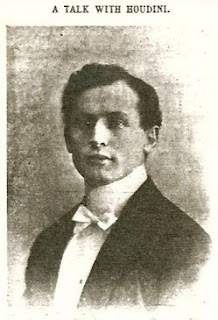 When Houdini opened at the Alhambra Theatre in London in 1900, he was challenged onstage by another "Handcuff King" named Cirnoc. Cirnoc not only claimed that he was the true inventor of the handcuff act, but said Houdini had never been to America. Houdini was defended on this point by a man in the audience (Chauncey Depew) who vouched for having seen Houdini in America several years earlier. Houdini then challenged Cirnoc to escape from a pair of Bean Giant handcuffs. Cirnoc failed and the next day newspapers wrote accounts of the dramatic onstage confrontation. Houdini The Handcuff King was off to fame and fortune.

Cirnoc was later booked against Houdini in an opposition theatre in Germany, but after this he vanishes from the Houdini story and indeed from magic history. In his December 1, 1903 Dramatic Mirror column from Huddersfield, England, Houdini revealed the true reason for Cirnoc's disappearing act -- he died.

Several deaths have occurred lately, among whom may be mentioned Paul H. Conrich, better known as Cirnoc, who has made quite a reputation as a "Handcuff King." He had been failing in heath, and had just signed a contract with Manager Richards to open in Australia, according to London Era, and died on his way to Sydney, where he is buried. He was about forty-five years of age and had been a performer for many years. He leave a son and daughter. He was recently married to a lady who used to manage Karo, when Karo toured America.


For such a "hated" rival, Houdini is respectful and even sounds somewhat mournful here. Maybe Cirnoc was not so hated after all? Maybe he was actually a plant that night at the Alhambra? Or maybe Houdini's vitriol towards "all other magicians" has been somewhat overstated. I am quite surprised in reading these columns that Houdini isn't at all hostile towards other magicians. He even gives name-lifting escape artists such as Nordini space in his columns right alongside T. Nelson Downs, Horace Goldin, and his own brother Hardeen.

But as the years and sheer number of imitators continued to pile up, Houdini is clearly starting to get irritated. In a column dated October 19, 1904 he laments:

When I landed in England in May 1900, no one knew that a handcuff could be made useful as a stage effect. Now, alas, I see hundreds billed as "World's Greatest Handcuff Kings," so I changed my billing to "Jail Breaker" and the all took that title too. All you have to do in England to become a "jail breaker" is to buy an English handcuff with two keys and you are made. But there is one thing I will say--no one tries to steal your name or change their name to sound like yours, as is the case in Germany. Here in England they do not go so far, and make good with their own names, which is something that German artists ought to think over. I believe in the motto: "Live and let live," but then I am not an undertaker.


Interestingly, it wasn't just Houdini who suffered from imitation. The stealing of acts and names seemed to be the endemic in the world of Vaudeville at the time. In his same December 1, 1903 column, Houdini writes about a familiar performer (and friend) who's act and name was being purloined while he was out of the country:

While W.C. Fields is in South Africa he has an imitation in Germany--or he will find one--who calls himself O.C. Shields. Same make-up; the only thing lacking to make it the same act is that Herr Shields is a sad comedian. I hear his real name is Oscar Streirhauer. My word!

Coming next: The Flower Medium.
Written by John Cox at 8:05 AM