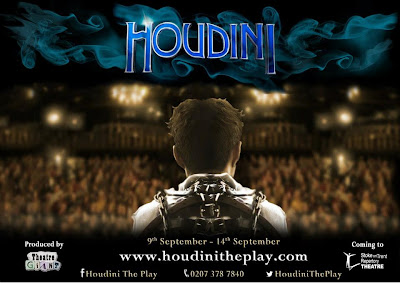 A new play, Houdini, will tour the UK from September through October of this year. The play is produced by Theatre Giant and focus on the early years of Harry and Theo Weiss -- "The Brothers Houdini" (which would have made a nice title). Here's the official plot description:

To be the greatest, you have to be willing to sacrifice everything. The highly successful Brothers Houdini soon find this out, as their death-defying feats start to draw in ever bigger crowds and ultimately attract the attention of the major theatre promoters.

Join us for what promises to be an explosive theatrical spectacle, when the prestigious promoter Martin Beck offers only Harry an opportunity that will change his life forever.

This intricate look inside the lives of two of the greatest performers the world has ever seen, explores the impact of family, love and jealousy. Watch as two masters of the stage perform, entrance, delight and surprise, performing a number of famous illusions in this gripping life story that is certainly not for the faint-hearted.

Discover the legend. Believe in the magic.


Houdini stars BAFTA award winning actor Stuart Brennan as Theo and Evanna Lynch (who played Luna Lovegood in the Harry Potter films) as Bess. The producers are said to be "still looking for the perfect Harry."


Houdini will have its World Premiere on September 9, 2013 at the Stoke-on-Trent Repertory Theatre. Tickets go on sale May 6.