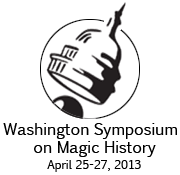 The Washington Symposium on Magic History concluded yesterday with an auction that saw the sale of a major Houdini artifact.

According to a report on the conference from attendee Dean Carnegie at The Magic Detective, Mike Caveney offered for sale the original contract, written in Russian, for Houdini's one and only tour of that country in 1903. What makes this contact especially attractive is that it's signed both "Harry Houdini" and "Ehrich Weiss." According to Dean:


"It sold for $10,000 to Bill Kalush, but word is he purchased it for someone else who has a big ass warehouse in Las Vegas, at least that's the gossip going around."


Head on over to The Magic Detective to read Dean's full report. Congrats to Ken Trombly for hosting what sounded like a very successful and memorable magic event.

UPDATE: David Saltman has posted photos of the contract and explains how it helps solve a Houdini mystery on his blog The Houdini File.
Written by John Cox at 11:12 AM