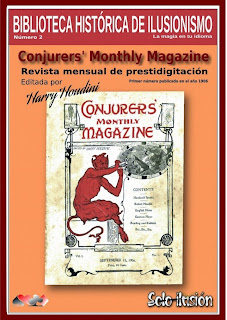 Here's an unusual offering that recently appeared on Amazon. This is the first issue of Houdini's Conjurers' Monthly Magazine for the Kindle. It's a facsimile of the original, yet all the text, including advertisements, is in Spanish.

I don't believe Conjurers' was ever published in Spanish, so this must be computer magic. It also appears to be annotated, which is a great idea. Too bad there isn't an English version as well.