When it rains it pours. Not only did we get news today that HISTORY's Houdini miniseries with Adrien Brody is set to air on Labor Day weekend, but now comes this bombshell from The Hollywood Reporter. 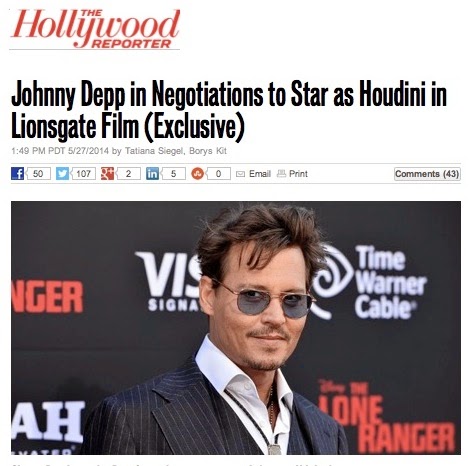 Is Johnny Depp looking to pull a vanishing act?

The actor is in negotiations to star as famed magician Harry Houdini in Lionsgate/Summit's The Secret Life of Houdini: The Making of America's First Superhero. Dean Parisot is directing.

The story, which is said to be in the vein of Indiana Jones, recasts Houdini as not just a master escape artist but an investigator of the world of the occult. Noah Oppenheim wrote the screenplay, which is based on William Kalush and Larry Sloman's book of the same name.

Depp is coming off two box-office disappointments in Transcendence and The Lone Ranger. But he also is set to revisit two blockbuster franchises in the coming year with Pirates of the Caribbean 5 and a sequel to Alice in Wonderland, both at Disney. Alice 2, also known as Through the Looking Glass, will shoot next, after he finishes the Whitey Bulger crime drama Black Mass. The only question is whether Secret Life of Houdini will shoot before Pirates 5. Lionsgate is eyeing a November 2014 start, which would push Pirates' production to early 2015.


This is potentially gigantic news. A star like Depp would certainly yank this project out of Development Hell where it has been trapped since its sale made a big splash in 2009. However, The Hollywood Reporter has been very quick to claim Houdini "Exclusives" that have not panned out (such as the ABC series), so the real news will be when/if Depp makes a deal.

Obviously, this is one we will watch VERY closely.