On the night of October 30, 1976, Saturday Night Live (which in those days really was live) performed a sketch at Houdini's grave in Machpelah Cemetery. Host Buck Henry introduced the segment with a brief biography of Houdini and the idea that he would return on this the 50th Anniversary of his death. He then went live to correspondent Garrett Morris at Houdini's grave in Queens. This was near then end of the show so it was just after midnight. Halloween. 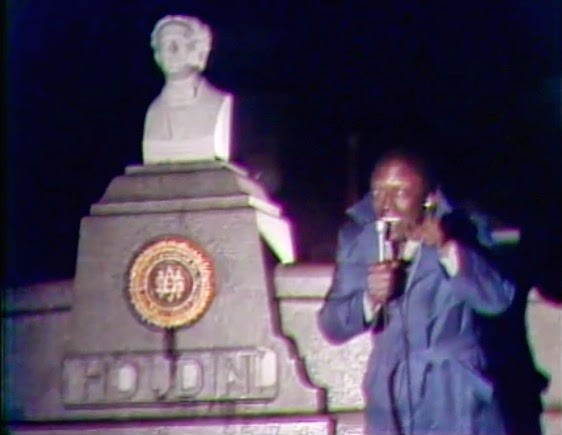 The nervous Morris reported that he had been approached by "a very strange looking dude" with Spanish accent, but he "was not Houdini, that's for sure" and he'd stand by. After another sketch, Henry checked back in on Morris, who was found quivering at the grave with his hair standing on end. 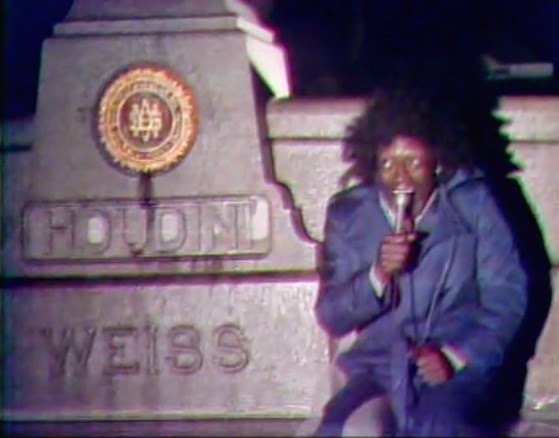 Pretty funny, and the grave itself looks terrific with the bust that was then only a year old (it replaced the bust smashed in '75). Even though this was played for laughs, there is still something somber and powerful about Houdini tomb, and you can hear nervous laughter throughout the audience when it's reveled Morris is at the actual grave site. You can really feel Houdini's spirit in the stone.

The episode is also notable in that it is Chevy Chases's last, and early on host Buck Henry cuts his head during a sketch with John Belushi. For the rest of the show the cast all wear bandages on their foreheads in solidarity. Live television indeed.

I missed this back in '76 and for many years never thought I would see it. But now the episode is available from Amazon Instant Video: 6. Saturday Night Live (SNL) October 30, 1976 - Buck Henry / The Band.