Here's another selection from the archive of McGill University yearbooks recently uncovered by our friends at the Houdini Museum in Scranton and Joe Notaro of Harry Houdini Circumstantial Evidence.

Below are images of Samuel J. Smilovitz a.k.a "Smiley." Sam was the art student who sketched Houdini during his lecture at McGill's Union Hall on October 19, 1926. Houdini was so impressed with the sketch that he invited Smiley to come see him backstage at the Princess Theater and do another for him. Smiley invited a friend, Jacques Price, and together they visited Houdini on October 22. It was during this visit that a third student, J. Gordon Whitehead, who was unknown to both Smiley and Price, joined the gathering. The rest is Houdini history. 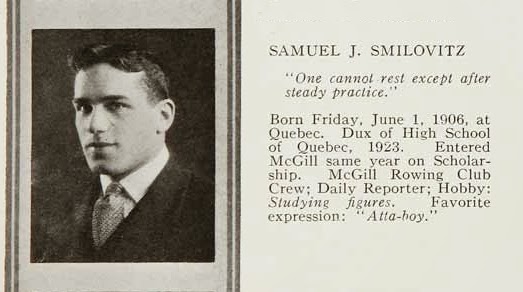 Above is Sam Smiley's graduation photo from the 1927 yearbook. Below is a shot of Smiley with fellow members of the Maccabaean Circle, a student group devoted to Jewish culture and ideas.


Unfortunately, I could find no photos of Jacques Price in the yearbooks. But you can see his photo in my recent interview with his daughter, Karen Mann. That post also includes a photo of Smiley in 1994.

Thanks again to Dorothy Dietrich, Dick Brookz, and Joe Notaro. You can check out all the McGill Yearbooks HERE.