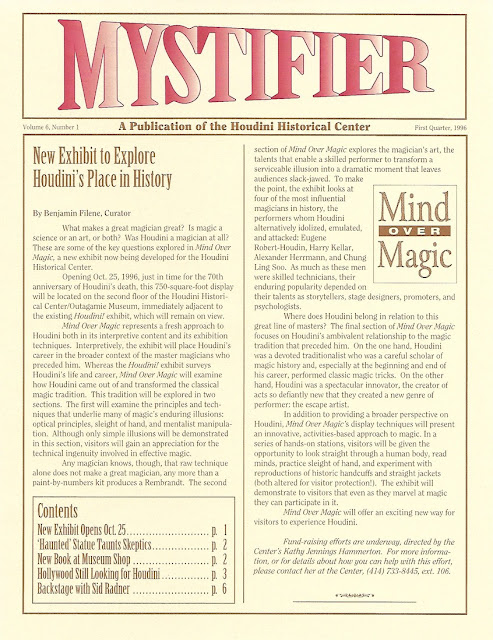 The First Quarter 1996 Mystifier kicks off with the announcement of a special exhibit called Mind Over Magic set to open in Fall.

Mind Over Magic represents a fresh approach to Houdini in both its interpretive content and its exhibition techniques. Interpretively the exhibit will place Houdini's career in the broader context of the master magicians who preceded him. Whereas the Houdini! exhibit surveys Houdini life and career, Mind Over Magic will examine how Houdini came out of and transformed the classical magic tradition.


[Mind Over Magic would ultimately be shelved in favor of an exhibition devoted to The Master Mystery.]

The newsletter continues with an article by Dr. Morris N. Young about Houdini's "haunted" bust in the collection of the HHC. The museum's bust is a clay copy of the original acquired by Sidney Radner from Hardeen. Young notes the mysterious destruction of other Houdini busts and asks: "Will it share the same fate as others? Or is there a supernatural element that is now content with its current location?"

This newsletter also contains an article by myself chronicling the many attempts by producer Ray Stark to mount a Houdini biopic. At the time this on-again off-again project was on-again. I was excited to have something published in Mystifier, which I now see as a forerunner and inspiration for my blog. The article was later published in MAGIC Magazine. I posted an updated version HERE.

The museum shop reports that a new book, The Importance of Harry Houdini by Adam Woog, is now in stock. So too are a set of 12 new Houdini postcards. Among the New Members are the familiar names of Ian McColl and Joseph M. Notaro.


In his "Backstage" column, Sid Radner talks about his recent trip to Las Vegas where he saw both David Copperfield and Lance Burton. He was also able to visit the early Copperfield collection. Sid writes:

A real highlight of our trip was being guests of David Copperfield at his "wearhouse," which houses his magic collection, offices, living quarters, exercise rooms, rehearsal rooms, etc. David has what must be the most complete collection of magic memorabilia in the world. He has an especially fine Houdini collection which includes some great posters.


Sid then reveals a scoop ("only in the Mystifier do you get information like this!") that the Houdini Picture Corporation is back in business and collectors will be able to acquire stock certificates in their names. While Sid doesn't detail it here, the company was reincorporated by Geno Munari who was establishing his "Houdini Magic Shop" chain in Las Vegas at this time.

Sid concludes with the news that Ken Silverman's still untitled Houdini biography is due for an October release from Harper Collins.