Extremely sad news today. Irene Larsen, affectionately known as Princess Irene, who was one of the founders of the Magic Castle, has passed away. 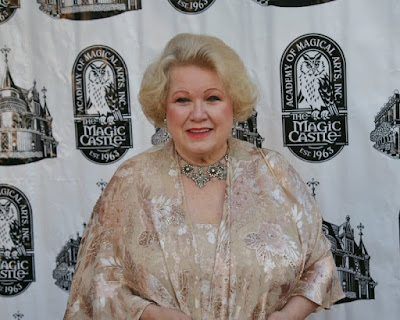 It is with heavy hearts that we announce the sudden passing of our beloved matriarch, international ambassador and co-founder of the Academy of Magical Arts, Irene Larsen. Princess Irene passed away peacefully Thursday morning at her home at Brookledge.

Irene, AMA member #1, was the love and the light of the Academy and truly defined our mission statement, serving the Magic Castle in every aspect. A past President of the AMA Board of Directors and member of the Board of Trustees, she served on virtually every committee over the years. She devoted her life to the Magic Castle.

From the Castle’s earliest days, Irene and her husband, AMA President for Life, Bill Larsen Jr., spent each evening greeting guests as they walked through the doors … a practice she frequently continued, right up until her untimely death.

An ardent animal activist, Irene referred to herself as “The Animal Police” within the magic community, ensuring that all performers who included animals in their acts – at the Magic Castle and everywhere – treated them with dignity and respect. In Genii: The International Conjurers Magazine, the monthly publication that she co-edited for many years with Bill, Irene posted tips in nearly every issue on how to correctly care for animals in acts.

Irene was a driving force behind the AMA’s international reputation. She insisted that Genii be referred to as The International Conjurers Magazine to be inclusive of magicians worldwide and attended magic conventions around the globe to promote both the AMA and the magazine.

Irene will live on in our hearts forever.

Please keep Irene’s children in your thoughts and prayers in the coming days … Dante (Blaire), Heidi and Erika Larsen, as well as her four beautiful grandchildren, Liberty, Lily and Liam Larsen and Jessica Hopkins.

All Hail the Queen. We love you Irene.


It was always a joy to see Irene at AMA functions. I recently had the pleasure of seeing her at the annual Founders Day celebrations where, as usual, she gave a lively, funny, and heartfelt speech filled with love for the members and the Magic Castle. She was true magic royalty and a very special part of the Castle experience. It's hard to imagine the Magic Castle without her. She will be greatly missed, but never forgotten.

Aloha, Princess.
Written by John Cox at 6:43 AM