Today Neil McNally continues his examination of Houdini's most challenging challenge escape. Or was it? 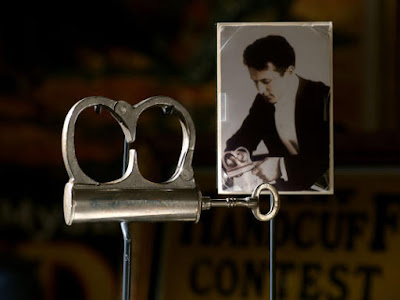 In the first part of this article, you read the full official account of the famous “Mirror Cuffs” and Houdini’s eventual escape and triumph over them. Now, if you were to take it all at face value, which you probably shouldn’t, you’d be no worse for wear in thinking that Houdini truly was the world’s greatest escape artist! No one here is arguing that point, but this is Harry Houdini we’re talking about, and with him nothing was usually what it seemed. The true story of the “Mirror Cuffs” is one that is multi–layered. By simply scratching the surface, true answers do reveal themselves, however others uncover one mystery, after another, after another.

"Talk about being billed big. You ought to see London and look about. Nothing on the walls but Houdini!"

With these not-so-humble words, Houdini wrote back to well-wishers in the United States. As mentioned previously, Houdini was deluged with adoration in the weeks following the event. The intense pressure he must have been under manifested itself by the end of the Hippodrome run when he became sick and was confined to bed for 12 days. Houdini, it would seem, was mortal after all.

Mortal or not, the answer to the puzzle of the Mirror Cuffs has been baffling experts for years. Where did these so-called mysterious handcuffs really come from? Was Houdini himself in on the challenge? The theories and answers to these questions, while not crystal clear, give us a unique insight into this challenge and, most importantly, the mind of Harry Houdini.

A good place to begin is, of course, the beginning. For years after the event, the identity of the newspaper representative who issued the challenge has always been shrouded in mystery. It eventually took the discovery of a newspaper cutting from the Sydney (Australia) Evening News dated April 27, 1910 to shed some light on the situation. The cutting is available for download at the website Harry Houdini Circumstantial Evidence. In it, the reporter’s name was revealed to be Will A. Bennet. His light hearted “version” of events begins matter-of-factly with:

I was working with a London daily. One morning I suggested to the editor that it would be a good “gag” or “scoop” if we could put a pair of handcuffs on Houdini, the Handcuff King, that he could not open…The editor agreed in much the same way as he might have done had I suggested that it would be a good “gag” if I could get His Majesty...to give me an interview on his life as a monarch.

After being given reluctant permission, Bennet travelled to Birmingham to locate a pair of handcuffs strong enough to stump Houdini. What follows is the kind of story that should be taken with liberal grains of journalistic salt. Allegedly, Bennet was turned down by numerous locksmiths unwilling to take on such a challenge. With frustration mounting, his cab driver asked him to leave after doubting that he would have enough to pay him in the end. A heated argument ensued, causing a nearby police officer to break up the fight. As luck would conveniently have it, the police officer knew of just the right locksmith for Bennet to talk with…Nathanial Hart.

It is Hart, of course, who is the locksmith generally credited with creating the “Mirror Cuffs.” According to Bennet’s story, Hart wouldn’t sell the cuffs, only loan them for the challenge. It is at this point that it’s hard to say if this whole article is one long “embellishment” or sprinkled with some degree of fact. Bennet seems to play the challenge idea off as an afterthought for his editor and the newspaper. But, when looking at it from a real business angle, for the Mirror and Houdini, it was very much a win-win situation. It was one that could provide mutually beneficial publicity for them both…and publicity is exactly what Houdini craved and the Mirror offered. 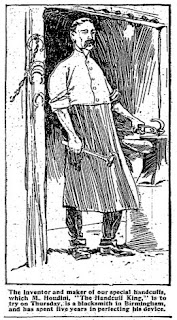 In the 111 years since the challenge, Nathaniel Hart’s remains just as elusive and enigmatic as the day the challenge was issued. Many theories exist as to who he really was and how involved or not involved he may have been in the challenge. Or for that matter did he even exist at all? As for the latter, all signs seem to point to yes. The late British Mirror Cuffs expert and locksmith Mick Hanzlick spent the better part of his life tracking down the truths of the incident. In a newspaper interview from the Hertfordshire Mercury dated January 25, 2008 Hazlick elaborates on his hunt for Nathaniel Hart:

I assumed that as Hart was named as coming from Birmingham, the heart of the metal working industry in the late 1800s and early 1900s, the place to look was in that area. However, it seemed that I was looking in the wrong place. I received a copy of a census form from 1891, which showed a Nathaniel Hart, coachsmith (metal worker), as living at 24B West Street, Hertford.

While this didn’t 100% prove the existence of the Nathanial Hart from Bennet’s newspaper article, it was an intriguing lead. Hanzlick went onto bring up other interesting points such as: Why wasn’t Hart in the Hippodrome audience to see the challenge take place? Why wasn’t he publicly thanked after the event? Was it actually a set-up by Houdini resulting in Hart being paid to keep quiet for his services?

Like British police cuffs of the period…the Mirror Cuffs were non-adjustable. Just as Bobbies often had to carry several different-size cuffs, the creator of the Mirror Cuffs needed to know Houdini’s wrist size in order to forge cuffs that fit him. This and other evidence led Liles to believe that Houdini designed the cuffs himself.

When talking about Houdini you’re always going to get more questions than answers. Nathanial Hart is no exception, and his dubious involvement in the “Mirror Cuffs” episode has to be left to our conspiracy-obsessed imaginations.

In our mind’s eye, it’s easy to envision a restrained Houdini within the darkness of his ghost cabinet locked in the throes of violent contortions. However, the real solution to the escape is most likely a little more simple than that…he had the key. If you’re still not a buying this theory, look no further than the Amazing Randi’s blunt assessment:

"I can assure you that the Mirror Handcuffs were not opened with anything but the key!" 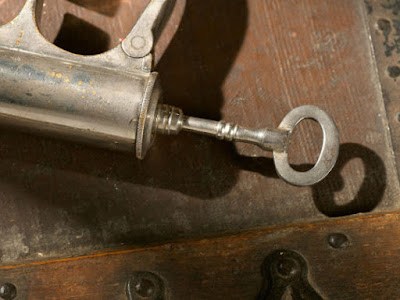 One of the more prominent theories ties into something as simple as…a glass of water. Smuggling a key inside a glass of water featured into several of Houdini’s other challenges. This lends credence to the fact that Bess may have passed it to him around the moment when he requested to stretch his legs and a cushion was brought onstage for him.

However, Kenneth Silverman dismisses this theory due to the key’s large size and suggests that the key was in the cushion. However, as Harry Houdini Circumstantial Evidence convincingly mentions:

Handcuff experts point out that the working area of the key is all that is required and that the key could have been cut down to a length of about 1 ½ inches. The actual nested mechanism is only about an inch from the keyhole and not deep inside the cuff lock tube.

The exact way he obtained the key, for the time being at least, will have to be relegated to the world of scholarly research and rabid internet forum speculation. Both are places that the world of Houdini is right at home. 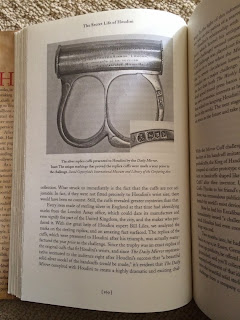 One would think that at this point there’s not much left to unearth regarding the challenge. However, William Kalush and Larry Sloman’s 2007 book titled The Secret Life of Houdini brought forth a scenario that seemingly altered the way the incident was viewed and Houdini’s involvement within it.

Six weeks after the Hippodrome, Houdini was presented with a silver replica of the original handcuffs by the British silversmiths Hamilton and Company while performing in Brighton, England. According to Kalush and Sloman, after you analyze the marks on the silver replicas, the visible date stamp was 1903. As the actual challenge took place in 1904, this naturally brought up an interesting question. Were the replica “Mirror Cuffs” possibly constructed for Houdini one year before the challenge took place?

In 2013, Mirror Cuffs expert Mick Hanzlick consulted with the London Assay Office; a firm that has controlled trademarks on silver for hundreds of years. This was their response.

The HC&O mark is the maker’s mark Hamilton & Company…the “h” denotes the date, 1903…The date marks did not run from January to January. The date marks ran from May to May.

Mick countered with this response:

The challenge was March 17, 1904. The replica cuffs were presented to Houdini about six weeks after the challenge, so at the latest that would be towards the end of April, 1904. During those six weeks, the cuffs would have to be registered as required by the Assay Office. So, that would have had to have been before May, 1904, therefore the 1903 “h” mark would have been the only one that could have been used.

Are you still with me? Hanzlick believed that the replica cuffs could have been made anytime between May 1903 and May 1904 and still carry the “h” mark. However, Hanzlick’s personal opinion was that the replicas were indeed made in the six weeks following the challenge and not a year before as stated in Kalush and Sloman’s sometimes factually embellished book.

When unraveling the Mirror Cuff’s long paper trail it’s hard to deny that nagging feeling that we will most likely never know the true answers and secrets that lie behind it. Houdini knew exactly what he was doing. The fact that the challenge is still being analyzed and dissected is a testament to his innate gifts at publicity and always leaving audiences wanting more.

Today the Mirror Cuffs and its silver replica reside in the personal collection of magician David Copperfield. They are a physical reminder of a simpler and more innocent; a time when Harry Houdini reigned supreme. 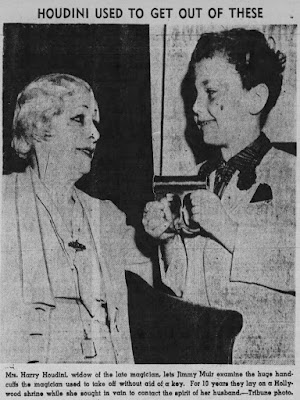 Special thanks to the works of Kenneth Silverman, William Kalush, Larry Sloman, and, above all, the late Mick Hanzlick.