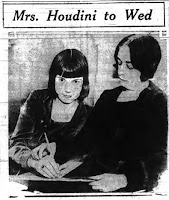 Chuck Romano has an excellent post on his blog My Magic Uncle about Harry and Bess Houdini's strange connection to Charles Chapin, the former editor of the New York World who was imprisoned in Sing Sing for the murder of his wife. Not only did Houdini regularly visit Chapin in prison, but Bess started up a correspondence with him after Houdini's death and at one point it was reported the two would marry!

This is a largely new story to me, so click the headline and have a read at My Magic Uncle.
Written by John Cox at 7:45 AM