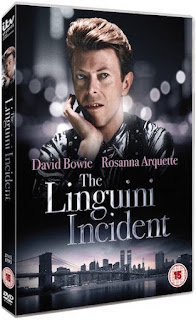 The 1991 film The Linguini Incident starring David Bowie and Rosanna Arquette has been reissued on DVD in the UK.

In the movie, Arquette plays an aspiring magician and escape artist who collects Houdini artifacts and comes into possession of "Madame Houdini's" wedding ring. While waiting for her big break, she works as a waitress at a Manhattan restaurant where Bowie tries to marry her so he can get his green card.

The film is loaded with Houdini references and escapes. In some territories it was titled Houdini & Company.

You can purchase The Linguini Incident at Amazon.co.uk. No word on whether there will be a new U.S. reissue.