Houdini and the Wizards of the South

A remarkable photo postcard showing a dapper Houdini posing with members of the Associated Wizards of the South (AWS) sold on eBay today for $470.93. Below is the photo and a description from the seller. 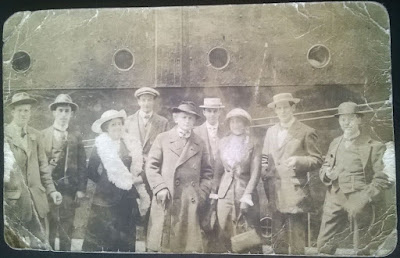 This is an exceptionally rare RPPC (real photo postcard) of Harry and Bessie Houdini with the AWS (Associated Wizards of the South) taken on Southampton Docks prior to Harry Houdini's departure to New York on 21st May 1913.

The AWS are the 4th oldest magical society in the world and Harry Houdini became a member during a 5 night string of shows at the Southampton Hippodrome in 1911. Famously the day after this first meeting with the AWS Harry Houdini performed his Water Torture Cell trick for the very first time to a rumoured audience of 1 in Southampton. Houdini wrote articles and attended further meetings with the group.

During one meeting the AWS chairman, Professor Woodley challenged the star to a display of contact mind-reading. Houdini, boastful of his own expertise in this area, insisted on being the person to hide the object for Woodley to find, which he did, over and over leaving Houdini unable to discover the secret to the trick - I know, as I'm his great grandson but its a family secret. Professor Woodley can be seen behind Houdini's left shoulder (the tall chap in a cap). The famed early magician Spitari is also in the postcard, second on the left.

These postcards were available for AWS members only and no more then 10 were ever produced. I believe this may be the only existing copy. It has been lent out by the family on a few occasions over the years. Channel 4 productions, The Magic Circle and Magical World have all borrowed the postcard from the family in the past.

A truly rare piece from an early magical society, original and direct from the family.


The only correction I'd make is I don't believe that's Bess standing beside Houdini. Still, a fantastic never-before-seen image of Houdini with a wonderful story to go with it. Congrats to the winner.