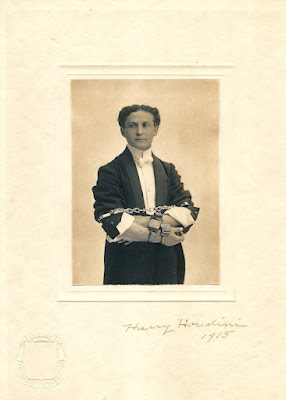 Today I'm excited to offer an exclusive first look at some choice items from Haversat & Ewing Galleries upcoming "Houdini's Birthday Auction" on March 23-24. This will be their largest auction to date with 250 items, of which 55 relate directly to Houdini or Bess or Hardeen.

First up is a Hardeen scrapbook!

Large, oversize 75 page personal scrapbook of Hardeen. Compiled by Hardeen himself from 1912-1914. Contains newspaper clipping and advertisements for Hardeen's upcoming dates and favorable press. Nearly every page has handwritten annotations by Hardeen. Includes a letter written by Hardeen's son " Dear Papa were (where) are my skates I will not go in the road, Theodore Weiss.". Hardeen types on the top of the page - This is the first letter that Toddles Weiss wrote to his Father. I received it in Buffalo, N.Y. Feb. 26th 1913. Signed Theo Hardeen Weiss. Measures 14.5" x 19". Detached front cover. A very historically important scrapbook. 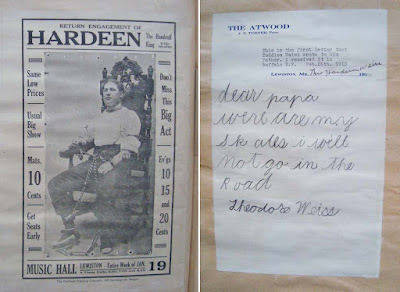 The auction also includes a jaw-dropping original photograph of Houdini in shackles (pictured at the top of this post). Here's the auction description:

Outstanding, original first-generation Houdini photo from photographer's collection. Image of a manacled Houdini taken by the Siegel Studio in Boston. The photo was developed on Baryta layer (fiber) photographic paper, giving the image a matte appearance. However, the image is highly detailed and crisp. Photo can be lifted to reveal a number 6, an indication for the photographer and client (Houdini) of what image was to be used or ordered. Harry Houdini's name is written below and the date of 1915. The image is from an earlier time in Houdini's career. One often sees the variant of this image taken at the same studio of Houdini looking down at his arms. Very rare.


A rare two page hand-written letter from Ira Davenport to Houdini dated June 10, 1910 makes up another lot. In it the famous medium and member of the Davenport Brothers writes:

"It gave me great pleasure to know your safe arrival and also to learn that you will do me the honor of a visit on or about July the 1st. and don't come with the idea that you are going to get away in a few hours. Come prepared to spend a few days!"


Another lot contains over 10 letters written by Houdini to Will Goldston (from Goldston's scrapbook). One letter sent from Germany in 1912 contains a nice mention of The Water Torture Cell: "The new stunt I am doing is a marvelous success, and without doubt the greatest spectacular thing ever witnessed on any stage."

Finally, one of Houdini's rare early pitchbooks with a page devoted to the Mirror Challenge will be up for bid. 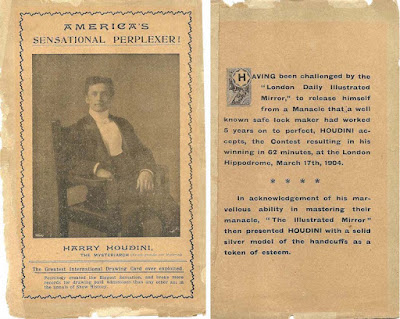 And this is just a small taste of what's to come. All lots will be available for view online in early March. This auction will also include a full-color printed catalog.