Here's an update from the great Fred Pitella on my recent post about the "Houdini handcuffs" in McSorley's Old Ale House in New York (Were these handcuffs left behind by Houdini?). Fred sent me this souvenir coaster that McSorley's produced a few years ago that sheds some light on the subject. 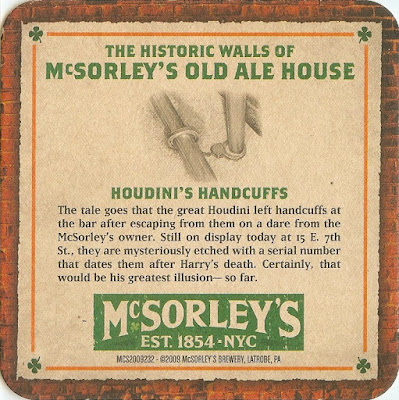 So while the story of Houdini visiting McSorley's might still be true, it looks like these are not the original handcuffs that Houdini affixed to the bar himself. According to Fred, one of the older bartenders told him they've had to replace the handcuffs because people took them for souvenirs.

But I still think any Houdini tour of New York requires and stop and a pint at McSorley's. In fact, just thinking about it is making me thirsty!