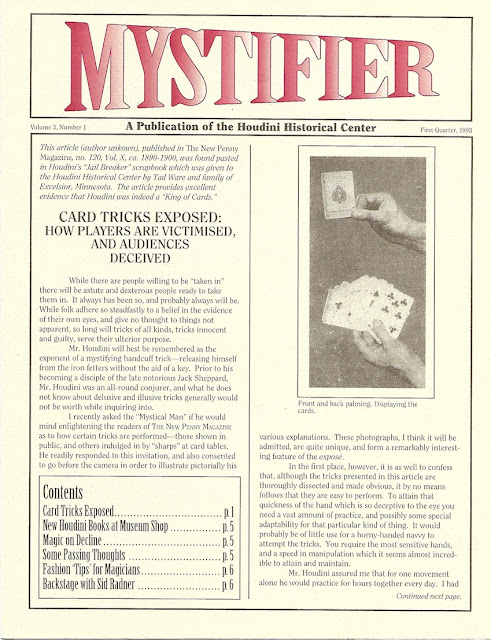 The First Quarter 1993 Mystifier kicks off with the reproduction of an article called "Card Tricks Exposed" from The New Penny Magazine (No. 120, Vol. X). It doesn't provide a date, but it appears to be from very early in Houdini's first european tour (similar to his "Wizard Exposed" articles of 1901).

I recently asked the "Mystical Man" if he would mind enlightening the readers of The New Penny Magazine as to how certain tricks are performed–those shown in public, and others indulged in by "sharps" at card tables. He readily responded to this invitation, and also consented to go before the camera in order to illustrate pictorially his various explanations. These photographs, I think it will be admitted, are quite unique, and form a remarkably interesting feature of the expose.


This is actually a pretty major exposé, revealing card moves practiced by card sharps and also magicians. The newsletter notes that this article comes from Houdini's "jail breaker" scrapbook, given to museum by Tad Ware of Excelsior, Minnesota.

The newsletter continues with a reproduction of an unintentionally amusing article from a 1913 Variety headlined, "Magic on Decline". The article rings the death knell of the magic art and puts the blame on exposure acts and "the lack of a master performer of the calibre of Herrmann or Kellar." (Ah, hem.)

Many magicians have given up the fight and entered other occupations. At this very time New York has two former magicians of high ability performing in its first class theaters. One is a dancing comedian and the other a comic ventriloquist. I know another magician upon whom great hopes were placed, but he has given it up and is studying law.


Also reprinted from 1913 are two oddities: "Some Passing Thoughts" by George Schulte, and "What to Wear While Performing Magic Stunts" by Harry Palmer, both from The Sphinx.

In his "Backstage with Sidney Radner" column, Sid praises Frank Koval's newly published Illustrated Houdini Research Diary. He also states that "Ken Silverman is writing what I predict will be the most complete biography of Houdini to date." And he says Pat Culliton's Houdini's Strange Tales and accompanying cassette tape are "first class all the way."

Sid goes on to say that his interview with Dorothy Young has to be postponed to the next issue due to the death of Dorothy's husband in December. He also promises to reveal a photo of Dorothy coming out of the Radio of 1950 illusion from the collection of Manny Weltman. At the time, that was an unpublished image. He finishes by announcing his upcoming visit to the Library of Congress and librarian John Higbee. Organizing the McManus-Young collection, which he complains "is not what the magic fraternity would like", appears to have been one of Sid's major efforts at this time.

Thanks to Gary Hunt of Handcuff Queens for supplying me with this issue.