Continuing my look back at the Mystifier, the newsletter of the Houdini Historical Center that ran from 1991-2003. 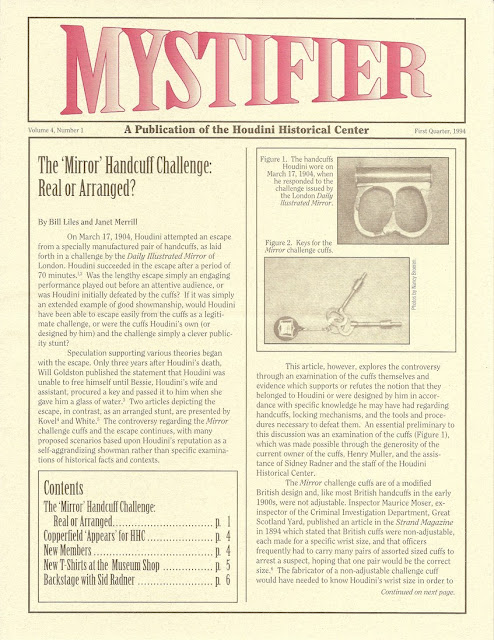 The First Quarter 1994 Mystifier kicks off with a favorite topic: Was the Mirror Handcuff Challenge Real or Arranged? The article by Bill Liles and Janet Merrill is very well researched and nicely annotated. Their conclusion? (Spoilers ahead!):

We believed Houdini used his extensive knowledge of locks and lock picking and his specific familiarity with the Bramah lock to design the handcuffs used on him in the Daily Illustrated Mirror challenge. The most challenging part of Houdini's 70-minute escape was probably maintaining audience attention while he pretended to be initially overwhelmed by the intricate locking mechanism, before simply using a duplicate key to escape from it.


The issue continues with a report on David Copperfield's performance at the Pickard Auditorium in Neehah, Wisconsin. David, who first visited the HHC in 1993, donated a portion of his ticket sales to the museum and attended a special members only gathering after the show. Sid Radner presented him with a gift basket containing assorted Houdini HHC souvenirs and "a half-pound of Houdini blend coffee from The Daily Grind, an Appleton gourmet coffee shop." (There was Houdini coffee?) The newsletter contains a nice photo of David receiving his gift.

New HHC members are listed on page 4. Among the familiar names is our friend Joseph Fox, Wayne Allan, Richard (Dixie) Dooley, Mick Hanzlik, and also John Gardner. Gardner was a British novelist who at that time was writing the James Bond books. Being a Bond fan, I've read all of Gardner's Bond novels, and in a several he name-checks Houdini. So it looks like he was a genuine fan!

Page 5 reproduces a 1913 article from The Sphinx on "A new and original break for locating the Chosen Card." It also announces that HHC curator Moira Thomas is leaving and that a national search for a new curator is underway.

In his "Backstage" column, Sid Radner discusses at length the Mirror article. He also teases that he has uncovered a new forgotten member of Houdini's company -- "a woman who worked for Houdini as an investigator of psychics in the Chicago area in 1925." He says an interview with her will appear in a future Mystifier.

Sid also writes about the recent BBC documentary, Omnibus: Houdini, and that Ruth Brandon's Houdini biography, The Life and Many Deaths of Harry Houdini, should be out soon in the United States (it was first released in the UK in 1993).

Thanks to Gary Hunt of Handcuff Queens for supplying me with this issue.