The Summer of Magic continues at the New-York Historical Society with a talk by David Jaher about Houdini and Margery this Wednesday, July 18. 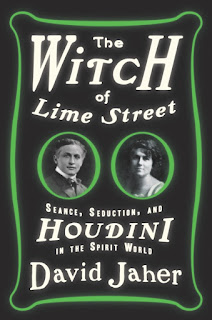 EVENT DETAILS
Her most vocal advocate was none other than Sherlock Holmes’ creator, Sir Arthur Conan Doyle. Her supernatural gifts beguiled many. There was only one left to convince—acclaimed escape artist Harry Houdini! History comes alive in this riveting account of the rivalry between Harry Houdini and the so-called Witch of Lime Street, whose iconic lives intersected at a time when science was on the verge of embracing the paranormal. Book signing after the program.

David Jaher is a screenwriter and the author of The Witch of Lime Street: Séance, Seduction, and Houdini in the Spirit World.

Click here for more information and to buy tickets.


The New-York Historical Society's Summer of Magic: Treasures from the David Copperfield Collection exhibition features rare treasures from the Golden Age of Magic, including Houdini's original Milk Can, Metamorphosis trunk, straitjacket, Bess's stage coat, and the Mirror Handcuffs (the first time the cuffs have been shown publicly in some 20 years). The exhibition runs through Sept. 16, 2018.