The Daily Journal News reports that magician Larry Bounds appeared as Houdini himself at the Big River Chautauqua in Bonne Terre, Missouri, on Saturday. Larry combined magic with the magician's own personal story. 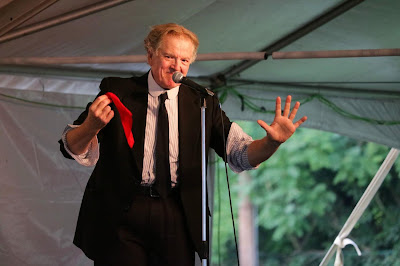 The crowd attending the final night of the Big River Chautauqua in Bonne Terre on Saturday received thrill after thrill in the performance of Larry Bounds, who assumed the role of Harry Houdini.

Houdini (portrayed by Bounds) explained that his magic troupe and equipment were currently on a train to Montreal, Canada for the beginning of a series of performances, but that his Saturday appearance was a special performance for the attendees of the Big River Chautauqua.

“Where should I begin?” Houdini said, after introducing himself. “Perhaps with a little bit of sleight of hand. Since I was a very small boy I have loved sleight of hand.”

Houdini then rolled up his sleeves and removed his watch before retrieving several small silk handkerchiefs of various colors. The magician then proceeded to make the handkerchiefs disappear, reappear and transform from one color to another.

Email ThisBlogThis!Share to TwitterShare to FacebookShare to Pinterest
Tags: Events, Impersonators, Other magicians