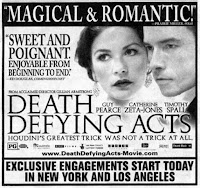 It was 10 years ago today that Death Defying Acts was released to theaters in New York and Los Angeles. The film starred Guy Pearce as Houdini and Catherine Zeta-Jones as a Scottish psychic out to collect his $10,000 prize. It also co-starred a young Saoirse Ronan, who has gone on to great success.

The movie only played for one week in just two locations. Did you see it in theaters? I did!