Look what I came home to... 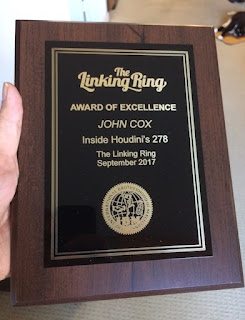 I'm very excited and honored to have received an "Award of Excellence" from the International Brotherhood of Magicians (IBM) for my article "Inside Houdini's 278," which appeared in the October 2017 issue of The Linking Ring magazine. Awards were announced at the IBM's recent convention in Grand Rapids, Michigan.

Thanks to all the members of the IBM and Linking Ring editor Sammy Smith for this honor. It's my first and only Houdini-related award! I will proudly hang it at my desk.