Once again we have some incredible film footage that has been hiding in plain sight. This time it's Hardeen's overboard box escape from the Steel Pier in Atlantic City in the 1930s. This appears in episode 4 of the 1999 series, Magic and Beyond, which is currently streaming on Amazon Prime. 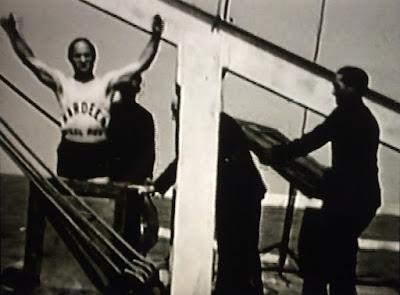 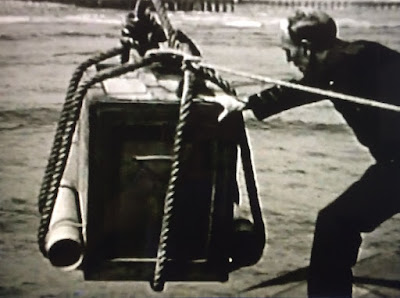 The footage is show in it's entirety and provides a lot of nice detail. We get a great closeup look at the box itself, which could be Houdini's 1914 box and likely the one on display at the American Museum of Magic. At one point there is a strip of some kind laid down along the edge of the box and then nailed into place. I'm not sure what that is. You can also see Jim Collins overseeing the stunt.

The Hardeen footage is followed by Houdini's own overboard box escape from The Master Mystery. This is familiar footage, but it's nice and clear here. William H. McIllany appears in the credits as the source of "Historical Footage."

The downside is the series itself is pretty sloppy as far as history is concerned. Co-host Kristi Sindt calls Hardeen "Houdeen", and the narration says Hardeen was underwater for a full five and a half minutes, which I seriously doubt. It also says that Hardeen was supposed to do the overboard box escape in The Master Mystery, but "because of illness, his brother Houdini substituted for him." If they say so!

If this footage seems familiar, that could be because a 16mm reel sold at Potter & Potter's auction of Houdiniana in 2014. But all we saw there were photos. Now you can watch the film itself!

Thanks to Roy Holcomb for the tip.