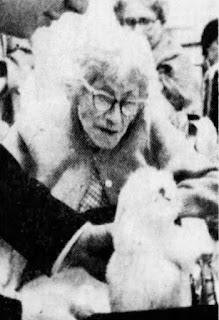 Recently I came across a remarkable article from the March 31, 1975 Journal News about 81-year-old Janet Langer who worked as a Houdini's secretary and stenographer. Any first hand recollection of Houdini is gold, especially now that so many (all?) of the known eyewitnesses have passed on.

"I was about 23 when I first started working with him in 1917. He was a very temperamental man, and hard to work for, but I was a young girl then and very much impressed with him.

I used to attend all his performances, but Houdini was a very secretive man. He never revealed any of his tricks to me. The only ones who ever knew how he made his escapes where his wife and his assistant, a man named John [sic] Collins."


The article goes on to say that when Houdini wasn't touring he was "dictating the story of his life to Janet in the attic of his three-story brownstone at 278 West 135th [sic] Street." It then continues:

"I used to take 150 words per minute shorthand in those days," she said. "He paid a good salary too. About $70 a week. In those days that was a lot of money. Of course his fees were phenomenal. When he was appearing at the Loew's State Theater in New York he was making $2000 a week, an amazing figure even by today's standards."

"He was a man who got what he wanted," she said. "His one regret was not having a son he could leave his secrets to."

Mrs. Langer said it wasn't always fun working for Houdini because he was so demanding, but seeing him perform made it al worthwhile. Occasionally he would take time out from his dictation to talk more intimately with her.


"He'd orate for hours and hours, then stop and say, 'Oh, c'mon, let's talk.' I'm a Orthodox Jew and he was very interested in Judaism. Houdini was a Jew (but not very religious).

"He was always asking me about my religion, and I was going to invite him to my family's seder one year, but just before Passover I quit. I got tired of it and decided to move on.

"I never regretted working for Houdini," she said. "I was young and he came along and gave me the opportunity to travel. I never would have gotten the chance otherwise. The traveling kept me from getting married too early, and I had several offers in those years."


I'm wondering if this "life story" Houdini was dictating could have been the autobiography that he is said to have later lost?

Mrs. Langer also recounts how Houdini escaped from a nailed "coffin" under the ice of the Detroit river, saying, "It was the most unbelievable thing I've ever seen. The crowds went wild." This is a little disconcerting as we know this didn't happen. But maybe she witnessed some other Houdini underwater escape and over time it melded with the Tony Curtis movie? Even reporter McEwen concedes that her "memory has been dimmed by age and the pain of arthritis."

But other than this, her recollections do have a ring of authenticity, and what a gem this is from 1975.