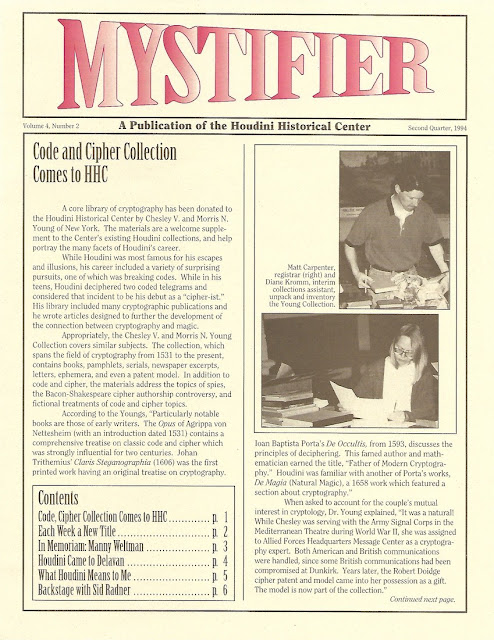 The Second Quarter 1994 Mystifier kicks off with the news that Morris N. Young has donated his collection of books and materials related to cryptography to the HHC. Young had penned and article in the Fourth Quarter 1993 Mystifier about Houdini's own fascination with the subject. An article by Arthur Moses about The Master Mystery follows. This piece originally appeared in the Texas Magic Collectors Newsletter.

We then get a surprise; an obituary for Houdini's nephew, Samuel M. Weiss. This is a family member I had not heard of before. The obituary is short enough to reproduce in full here:

Samuel M. White (Weiss), age 86, passed away on April 4, after a battle with cancer. Samuel was born in New York in 1908, and was named after his grandfather, Rabbi Samuel Mayer Weiss [sic]. The son of William Weiss, Houdini's brother, Samuel was the last of the second generation of Houdini's family.

A a young man, Samuel attended medical school and became a cardiologist. His schooling was sponsored by another Weiss brother, Leopold. The young Samuel Weiss changed his name to "White" when he joined the United States Army.

Samuel was known to have been very fond of his uncles Theo and Ehrich (Houdini). As Manny Weltman, an acquaintance of Samuel's, recalled during a May phone interview, "Samuel said that throughout his childhood, he always referred to Houdini as 'Uncle Houdini,' never 'Uncle Harry' or 'Uncle Ehrich'." Samuel also remembered fondly an occasion upon which Houdini gave him a military outfit. The young boy would march for and salute his "Uncle Houdini." We extended our sympathies to his wife, Barbara.


The issue continues with another obituary, this one for the great Houdini historian, author, and collector Manny Weltman, who died on May 16, 1994. It chronicles Manny's many varied interests and achievements, and includes a nice photo of Manny with Patrick Culliton, Sidney Radner, Stanley Palm, and Diego Domingo at Pat's home in Laurel Canyon. (Some day I will do post about my own memorable first meeting with Manny in 1980.)

A very good article from the 1989 Delavan Enterprise by W. Gordon Yadon about Houdini's connection to the Flitcroft family of Delavan follows. The Flitcrofts famously took in the 12-year-old "Harry White" during his runaway days. The article includes a letter, reproduced in full, that Houdini wrote to Mrs. Flictcroft in December 1907. It also states that their house at 328 S. Sixth Street is still standing!

Benjilini contributes a fine article called "What Houdini Means to Me," which includes a poem by 11-year-old Yaniv Amar, a member of The Great Benjilini Society of Young Magicians, Assembly 33.

A Clio Award winning poster designed for the HHC by Birdsall Voss & Kloppenburg, Inc. of Milwaukee is showcased. The poster features the iconic 1903 image of Houdini in loincloth and chains with the superimposed text: "Handcuffs, Chains and Leather Restraints. No, It's Not Another Madonna Video." (For context, this was during Madonna's controversial S&M period.)

In "Backstage with Sid Radner," Sid tells the story of Mario Cockrell who saved 20 trapped miners in South Africa by using a trick "he had learned from a book by Houdini." Cockrell was able to make his body rigid, creating a bridge that allowed the miners to cross to safety. Sid says, "Of course, all Houdini buffs know where Houdini described this stunt." Do we? Miracle Mongers and Their Methods, I'm guessing?

Sid then reports on the annual Magic Collectors Convention, held this year in Eureka Springs, Arkansas. "Houdini items disappeared first, as always." He then reflects on the sad news of Manny Wetlman's passing, and thanks Arthur Moses and Benjilini for their contributions to the newsletter. He finishes with his usual sign off: "Houdini Lives!"

Contents:
Code, Cipher Collection Comes to HHC
Each Week a New Title
In Memoriam: Manny Weltman
Houdini Came to Delvan
What Houdini Means to Me
Backstage with Sid Radner