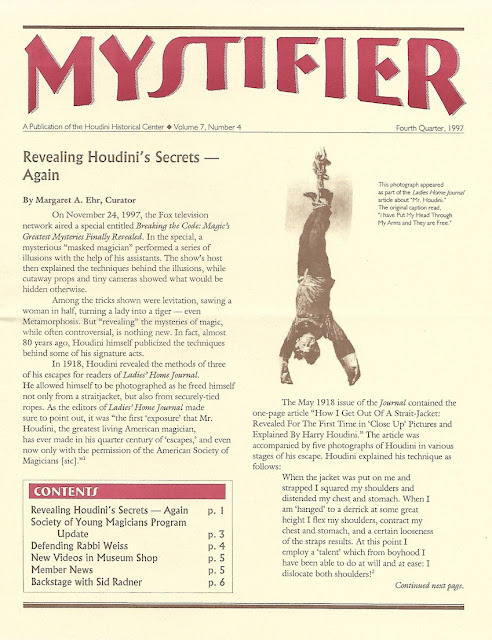 The Fourth Quarter 1997 Mystifier begins with the first article by new curator Margaret A. Ehr. In it, she addresses the controversial Fox television special Breaking the Magician's Code: Magic's Biggest Secrets Finally Revealed, which was running at this time. Ehr condemns it--along with the rest of the magic community--but she notes Houdini himself exposed his own secrets from time to time. She then explores two articles Houdini wrote for The Ladies Home Journal in 1918: "How I Get Out of a Strait-Jacket" and "How I Get Out of My Rope Ties". Near the end she states:

Perhaps Houdini had no fear that others, even knowing his exact techniques, could ever hope to truly challenge him. Houdini himself realized that he was physically exceptional. He understood that his short stature worked to his advantage, as did his impressive strength and flexibility. Few could match Houdini's claims of a double-dislocation at will, or six-inch chest expansion, either. Even knowing precisely what Houdini did to achieve his escapes, few if any magicians would ever be capable of Houdini's success.

Too many attempts have been made to malign the reputation of Houdini's father, Mayer Samuel Weiss, especially regarding whether or not he was ordained as a rabbi. It is my purpose to show how unjust those accusations are.


Young goes on to explain how one went about becoming a rabbi in the days of Houdini's father, and how no official paperwork did not mean he was not a rabbi. Young doesn't name names, but this doubt was first cast by Manny Weltman in his 1993 book, Houdini: Escape into Legend, The Early Years: 1862–1900. (Rabbi Weiss's Certificate of Ordination was discovered by David Saltman in 2016.)

The museum shop announces pre-orders for four upcoming videos: Mystic Circle Murder, Houdini The Life of the Worlds Greatest Escapolgist, The Truth About Houdini, and a 2-set VHS of The Master Mystery. The announcement of The Master Mystery was a bombshell as it marked the first release of this movie. A familiar name listed in the "New Members" column is David Byron.

In his "Backstage" column, Sid Radner again sings the praises of the Goodspeed Opera House's Houdini musical. He also gives a detailed report on the Official Houdini Seance, which that year was held on the stage of the Goodspeed. A very special attendee was Anna Crankshaw (Thurlow), great-granddaughter of Margery. Also around the table were: Patrick Culliton, Tom Boldt, Gene Gamache, Larry Weeks, Geno Munari, and Susan Postal, the actress who played Margery in Goodspeed play. The medium was Elaine Kuzmeskus assisted by Barbara Dryden-Masse. Harry, as always, was a no show.

Sid concludes with a mention of a new series by Canada's Discovery TV on the history of magic set to premiere in Fall 1998. Sid says the crew spent 5 1/2 at his home shooting material for the Houdini episode.

[It's surprising this newsletter fails to mention the movie FairyTale: A True Story which was released in October '97.]