Appleton plans to bring Houdini sculpture back into public view 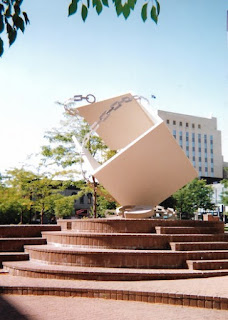 The Post-Crescent reports that Richard C. Wolter's "Metamorphosis" sculpture that once adorned Appleton's Houdini Plaza could return to public view as soon as next summer.

The Appleton Public Arts Committee on Wednesday endorsed a plan to place the 20-by-20-foot sculpture on a plaza along the Fox River at the south end of the Lawe Street bridge.

Deputy Parks and Recreation Director Tom Flick believes the location works well because it's across the street from a marker that points out the place where Houdini almost drowned as a child. The installation would be permanent.

The iconic sculpture was donated to the city in 1985 by Boldt Development Corp. It stood in the center of Houdini Plaza until 2010, when it was removed because the base was deteriorating. The sculpture is currently lying on its side outside the Appleton parks and recreation facility at Memorial Park.

Houdini Plaza underwent a major renovation in 2013. A Houdini bust was added to the plaza in 2015.