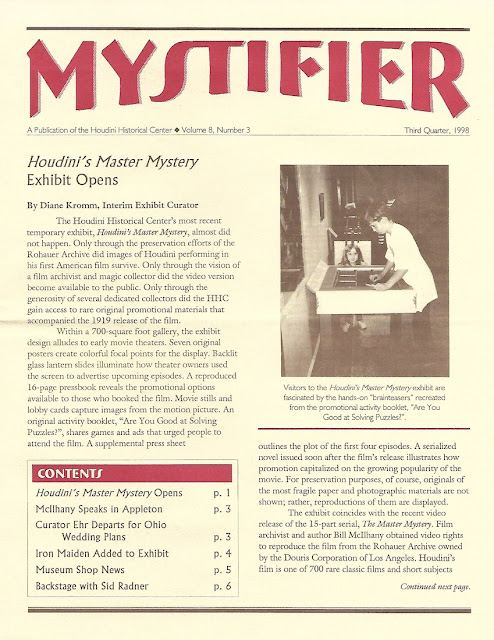 The Third Quarter 1998 Mystifier begins with a report on the opening of a special exhibit devoted to Houdini's The Master Mystery. The exhibit was timed with the first VHS release of the movie by HHC charter member Bill McIlhany (covered in the previous issue). It gives a taste of what is on display:


The newsletter continues with the news that curator Meg Ehr is leaving to be married in Ohio and the search in on for a new curator. There's a report on Bill McIlhany's talk about restoring The Master Mystery at the Houdini Club of Wisconsin's recent convention in Appleton. We then get the exciting news is that Houdini's "Iron Maiden" (more correctly called a gibbet), having survived the Niagara Falls museum fire, is now on display at the HHC. The newsletter provides a nice description of the famous prop, including dimensions:

The apparatus is composed of two pieces, one section imprisoning Houdini from foot to shoulders, while the other covered his shoulders and head. The total interior height of the Iron Maiden is 74 inches and the shoulder width is 22 inches. From foot to shoulder, the bottom section measures 56 inches.

Today Houdini's gibbet is in the David Copperfield Collection.

The museum shop announces the arrival of The Master Mystery VHS along with several new postcards. We also get a report on the recent filming of an episode of  E! Entertainment's Mysteries & Scandals at the HHC.

Sid Radner begins his "Backstage" column with a report on the Houdini Club of Wisconsin's 60th Anniversary Convention held in Appleton over the Labor Day weekend (which I attended). He then announces that The Official Houdini Seance will be held in Las Vegas. Seance attendees will get an early screening of TNT's new Houdini biopic starring Johnathon Schaech. Curiously, Sid says Houdini was in Las Vegas during his lifetime, but I'm unaware of any Las Vegas visits, unless Sid is counting train stops during his trips west?

Sid also reports on E! Entertainment's filming at the HHC -- "It seems Houdini holds perennial appeal" -- and that he has received word from Dr. Joan Higbee, reference specialist to the Library of Congress, that Houdini will appear in the December issue of Civilization Today.