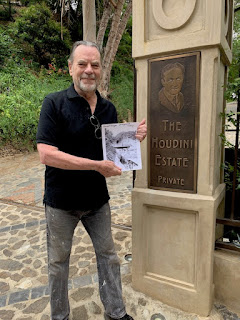 Recently Patrick Culliton and I made a fresh search for the location of 2435 Laurel Canyon Blvd., where Bess Houdini and Edward Saint lived from about 1933-35, and where Houdini himself might have resided while making The Grim Game (although firm evidence for this remains elusive). What instigated our search was the appearance of a photograph of the house, the first we've ever seen, that sold in a recent Haversat & Ewing auction for a whopping $1,925 on a $125-$150 estimate. The photo is annotated in Bessie's hand: "My home on Lookout Mountain Laurel Canyon Hollywood Calif."

Turns out it was less of a search than a confirmation. Patrick has always pointed to a mountainside just off Laurel Canyon Blvd.--directly across from what is today called The Houdini Estate--and said that was where the house sat before it burned in the massive 1959 Laurel Canyon brush fire. The remains were later demolished when the mountainside was graded back to widen the street.

Sure enough, all we needed to do was hold up a printout of the photo to see that distant mountains lined up perfectly. But the photo also offered up some new information. According to canyon lore, the house had an "elevator" to the street. It's not clear, but I think the photo might show part of what might be funicular chair to the street, which did exist in Laurel Canyon. 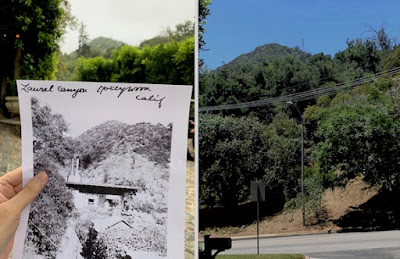 But most intriguingly, the photo shows that the house sat higher and further back on the mountain side than we thought. This suggests the possibility that the foundation didn't fall victim to the grading of the hill after all. So, obsessives that we are, Pat (age 75) and I decided to climb the hill and investigate. The hill is steep and eroding and I was worried one of us would take a fall. Little did I know the real danger we were heading into...

We made our way gingerly up the crumbling hill to what we could see was an open area. Once there, we found a pasture that was suspiciously level, exactly what you'd expect to see if a house once stood there. That's when we started to spot random bricks in the ground and some very old and rusted pipes. There was also what appeared to be a stone staircase angled down toward the adjoining property once owned by Tom Mix and Frank Zappa. So it was clear. Not only was this the site of Bess and Ed's house, but there were still remains to prove it! (Yes, I took a brick.) 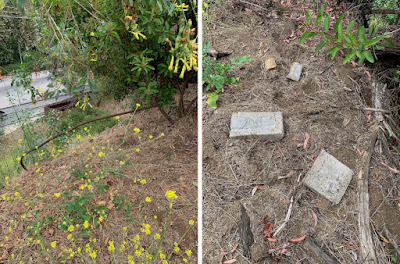 That's where we should have left well enough alone. But we were intrigued by a second plateau higher up the hill and felt we needed to investigate. So we made our way higher into thicker brush. When we hit the second plateau we found no remains of a house. We did find a treehouse and what appeared to be evidence of homeless encampment, so we decided we had gone far enough and began to search for a safer path back down the hill.

That's when I felt the first sting.

I looked down to see that a wasp had just stung me on my arm. In fact, there were two of them. Bemused, I called out to Pat, saying I just got stung by a stupid wasp. But before I finished my sentence, I heard Pat yell, "Wasps!" Like in a horror movie, as he ran past me I turned to see his back was COVERED in wasps. That's when I realized I was also COVERED in wasps. Somewhere, somehow, we had tripped up a wasp nest and they were on the attack!

Websites say if you are attacked by a swarm of wasps you should not bat them away, wave your arms or make noise. You simply remain calm and walk away in a straight line. We did NOT do that. Instead, we got down that mountain in record time, swatting and waving and yelling the whole way. We both ended up with a dozen stings each. Thankfully, neither of us are allergic, and although we both felt dizzy and spent a pretty uncomfortable week nursing our stings, we survived.

And we found Bess and Ed's house. Like heroes.