'Before Houdini' by Jeremy Holt released

Today sees the release of Before Houdini, a new graphic novel by Jeremy Holt with art by John Lucas. This is a followup to his 2018 book, After Houdini. 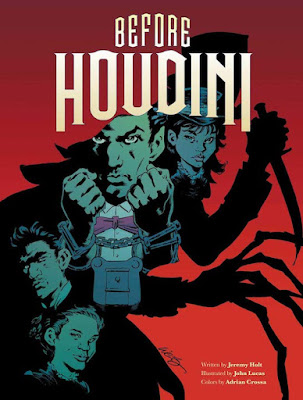 The exciting second volume of the After Houdini saga explores the origins of the elusive master of magic, the man who would become…Houdini.

London, 1888. A shadowy killer stalks the streets of London, his appetite for blood unleashed upon the city’s lower classes. To defeat him, MI6 turns to its most top-secret team: four teenage agents with extraordinary gifts—including a young American immigrant with a talent for illusion . . .

After Houdini began the story of Josef Houdini, son of the famous Harry Houdini—brilliant illusionist, acclaimed escape artist, and top-secret covert operative. Now we turn back the clock and meet Ehrich Weiss, a young man whose skill at picking locks is about to land him the adventure of his dreams, and pull him into a war that will affect his life—and his son’s—for years to come. This is the story of Ehrich’s strange beginnings, from before he was a world-famous magician. Before he was a master of espionage. Before he was...Houdini.


A special exhibition called Before Houdini: The Making of a Graphic Novel will be on show August 9 to September 22 at the Jackson Gallery at Town Hall Theater in Vermont. Details here.

Purchase Before Houdini at Amazon.com (U.S.) and Amazon.co.uk (UK).