This weekend I'm headed to Atlanta to give a talk on "Houdini in Early Cinema" at The Breman Museum as part of their Inescapable: The Life and Legacy of Harry Houdini programing. My talk is on Sunday, July 14, at 2:00pm and is free with general admission. Click for details.

This will be a quick trip, so I don't think I will have time to do any Houdini archeology in the city. But here are some of the sites associated with Houdini in Atlanta.


The Forsyth Theater stood at the northwest corner of Forsyth and Luckie Streets. Houdini first appeared here during the week of January 1-7, 1912. He returned April 19-25, 1915. During his 1915 engagement he was challenge by the Red Rock company to escape a packing case. It was also reported that he escaped from his "tank" (likely the Milk Can) after it had been filled with Coca Cola. Unfortunately, the Forsyth and the building that housed it is now long gone. 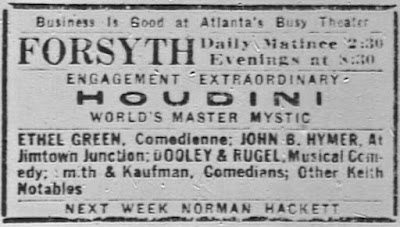 In January 1920 Houdini’s The Grim Game played for a week at the Strand Theater located at 56-58 Peachtree Street (not be be confused with the later Strand Theater on Decatur Street). Terror Island also played here in May 1920. The theater closed in 1923.

Houdini himself returned on March 13, 1924 to give his spiritualism lecture, "Can the Living Communicate with the Dead?", at the Woman's Club auditorium at Wimbish House. Happily, Wimbish House still stands and is still home to the Atlanta Women's Club. 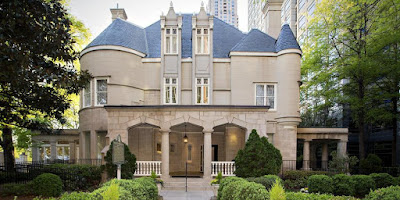 During this 1924 trip Houdini stayed at the Hotel Ansley, which stood on the south side of Williams Street between Forsyth and Fairlie. It later became the Dinkler Plaza Hotel. It was razed in 1972. 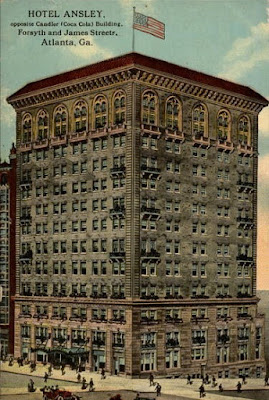 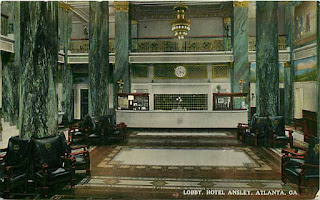 As far as I know, Houdini never performed an outdoor stunt in Atlanta, although I've not given up hope that one may turn up. Possibly the good folks at The Breman have uncovered something?

Unless some major Houdini news breaks, I won't be updating the blog until my return. Hope to see some of you in Atlanta!

Thanks to to Perry Reed for providing info on the Strand Theater.

UPDATE: Houdini and I call "Action" at The Breman Museum.