Here's a good interview by Sheila Gibson Stoodley of The Hot Bid with Gabe Fajuri of Potter & Potter about this postcard coming up for action February 29th. This famous image, taken in Holland in 1903, continues to fascinate. 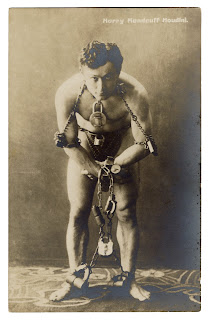 Why might Houdini have wanted to pose for these photos? What do they do for him that a fully clothed shot does not? He posed for both, of course. He understood every aspect of what that meant in the sense that it might have been a little bit scandalous. He was definitely pushing a boundary there, and stirring up interest–he’s not just shackled, he’s basically undressed. It’s titillating, but it had the added effect of proving that he was not hiding anything and he was able to escape the chains through his ability alone.


I'd also add that this image appears to me to deliberately evoke similar photographs of popular strongmen of the era, such as Eugen Sandow. These photos where considered artist studies of the "perfect physique", recalling classical Greek and Roman sculpture. So Houdini was doing what he did so well -- mixing art forms and taking it to new level; a Grecian Ideal strongman in chains from which he escapes. Electric!

Click the headline to read the full interview at The Hot Bid. Potter & Potter's "The Magic Collection of Jim Rawlins Part III" auction can be viewed HERE.