Sean Doran of The Mysteriarch is back with another spectacular find! This time Sean, with the help of the good folks at the Palisades Interstate Park and Barrymore Film Center/Fort Lee Film Commission, has tracked down the location of Houdini's cliff battle in The Man From Beyond. Sean explains:

"I originally set out to locate this setpiece along the Niagara gorge area and Devils Hole State Park in Niagara Falls, NY, but quickly realized the geography and river backdrop was not accurate to that shown during the scene in the film. After a few days of online research, I turned to the other known filming locations of 'The Man From Beyond', specifically Fort Lee, New Jersey." 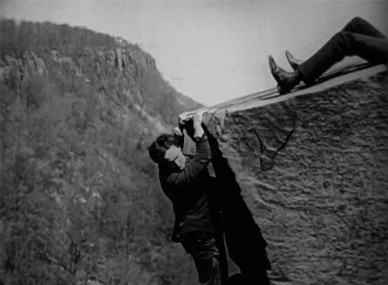 Sean shares some great photos of the site today, which is still very recognizable. So what are you doing here? Click the headline and get a cliff full at The Mysteriarch!

Email ThisBlogThis!Share to TwitterShare to FacebookShare to Pinterest
Tags: [History], 1922, Filming locations, Links, Movies, The Man From Beyond (1922), Then and Now