A clipping from the April 8, 1933 Toronto Star Weekly sold for $67 on eBay over the weekend. The article, "Peril Of Working With A Magician", interviews Ruth Hathaway, who claims to have assisted Houdini and other magicians such as Thurston and Blackstone. (I've never heard of her). But the true attraction is this dynamite photo of Houdini in "a rope-bound straitjacket". 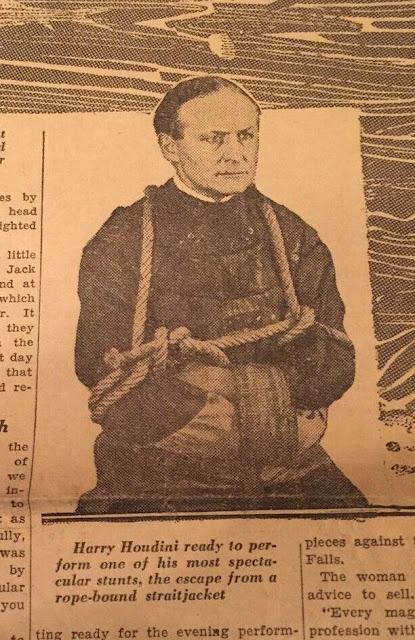 I've been finding a lot of new images of a straitjacketed Houdini in newspapers from 1923, which is when I suspect this photo was taken. But this is the first image I've ever seen of him in a straitjacket with additional ropes added. I love it!

Thanks to Kevin Connolly for the heads up.
UPDATE: I've now discovered an even better (or at least more complete) version of this same photo. This appeared in the Boston Post promoting Houdini's upcoming suspended straitjacket escape in the city on December 22, 1921.