I'm taking a break from my break to bring some breaking news. The owners of the mysterious Chinese Water Torture Cell that was uncovered in Canada and revealed here last month have decided to go public. The cell was acquired by Richard Sherry and Dayle Krull of Sherry and Krall Magic. Richard posted the following on his Facebook today:

We are the proud owners of a controversial Chinese Water Torture Cell that has been appraised to be 90-120 years old.

All we know for sure is this; it appears to have the exact measurements and operation as Houdini's original Chinese Water Torture Cell!

We purchased this Cell simply as an addition to our collection and are wondering if maybe it is more significant than we initially understood. 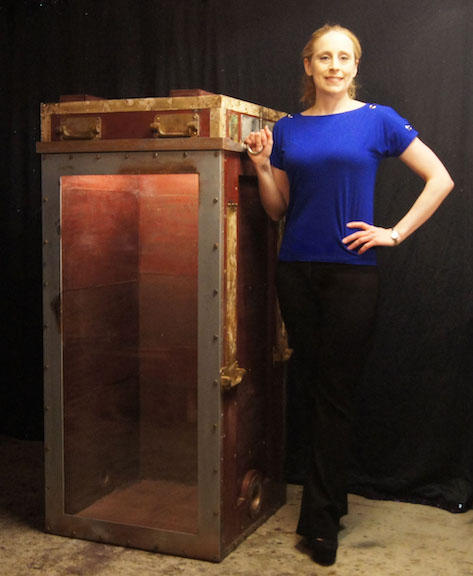 Richard and Dayle are no strangers to Water Torture Cells, having created several replicas as well as modern versions (see links below).

Having lived with this mystery for a month now, I really have no idea what this cell could be. The fact that it's old doesn't mean it still couldn't be a modern creation made with old wood and aged fixtures. The answer to the mystery is known by the man who sold it to Richard and Dayle, and his refusal to provide any information is both suspicious and a disservice to the new owners and magic history. So without provenance, wider speculation, in my opinion, is pointless. This just has to stand as a Water Torture Cell replica of unknown origin. But it's a cool one.

Congratulations to Richard and Dayle.
UPDATE (2/6/21): Richard and Dayle have written a two-part guest blog showing the cell in detail (Part 1) and sharing their discoveries and theories (Part 2).