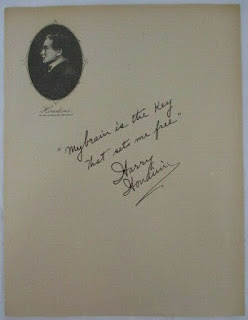 Fake Houdini signatures have been flooding online auction sites such as Liveauctioneers and eBay lately. These all appear to be the work of the same forger whose fakes started appearing last year.

The signatures are similar enough that it may be some kind of technology in use, such as an autopen. But when the forger attempts other "Houdini" handwriting, they fall down entirely. Also, the context in which they appear--on sheets of blank stationary for example (also fake)--is suspect as this is not something Houdini was known to have signed.

All these fakes come with a "Certificate of Authenticity", which, ironically, has become a red flag in itself. There appears to be no shortage of bogus or just careless authentication services out there. But there is a discernible style to these fakes, so they are not fooling experienced Houdini collectors and auctioneers. These are being made to snare novice collectors and they have been selling, sometimes for many hundreds of dollars.  So buyer beware!