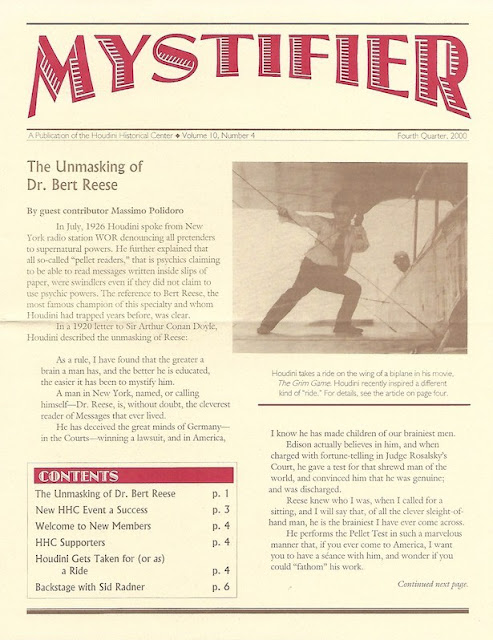 The fourth quarter 2000 Mystifier begins with an excellent article by guest contributor Massimo Polidoro about Houdini's exposure of pellet reading medium Bert Reese. It's well researched and not a common story.

This is followed by a report on the HHC's recent children's Halloween event with a performance by member Rondini. Among the list of new members is the familiar name of Leonard Hevia.

Guest contributor Paul Rosen then provides a first hand report on the Houdini ride at Six Flags Great Adventure in New Jersey. Paul even describes his experience of standing in line and overhearing people talking about Houdini:

The group discussed how Houdini was punched in the stomach and died later that day in the "big water tank trick." They spoke of his ability to "Talk to the dead." And one gentlemen even knew that he was once married to Jamie Lee Curtis' mother!


The ride in set inside a mock up of 278. Paul describes the impressive decor inside and out. He then does his best to explain the ride itself:

The best way I can describe the ride is that we were given the sensation that we were somehow rotating, although we felt no ill effects of such travel. We never felt gravity kick in, even though we defied it while presumably upside down. Many people seemed to enjoy the ride.

In his "Backstage" column, Sid Radner reports on that year's Official Houdini Seance held at The Humphrey Scottish Rite Masons Center in Milwaukee, Wisconsin. He then says he and his wife Helen have purchased a condo in Florida where they will spend winters. He also reports: "There are strong rumors about a Houdini stamp to be issued by the United States Postal Service in 2002. All of us at the HHC hope this turns out to be true."

Sid signs off by wishing all a happy Christmas, Hanukkah, and New Year.

Contents:
The Unmasking of Bert Reese
New HHC Event a Success
Welcome New Members
Houdini Gets Taken for (or as) a Ride
Backstage with Sid Radner