Sean Doran is searching for Houdini at Niagara Falls 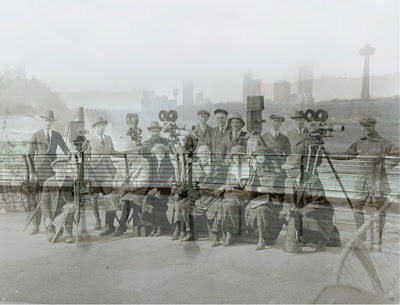 Here's something exciting. Sean Doran, who attended last year's Official Houdini Seance in Niagara Falls (and sent us photos), has decided to take up the task of finding some of the locations for Houdini's 1922 film The Man From Beyond. And he's off to a great start! Here's what Sean sent me over the holidays:

"I had a bit of time yesterday to stomp around The Falls in balmy 34 degree sleeting weather. I originally set out in search for the shots of the rapids shown in the movie, but some of the trails I wanted to hit were closed for the season. Dejected, I wandered back to one of my favorite spots to take in a view Of the falls all by myself as no one else was there. Standing in the cold rain, I looked to my right and hen it hit me, this looks like the spot of the crew photo!"

I would say he found it!

The area is part of Prospect Point Park. Some of the point fell victim to erosion and a spectacular landslide in 1954 (caught on film). But it appears the Houdini location survived and is there just waiting for us to take a new group shot! 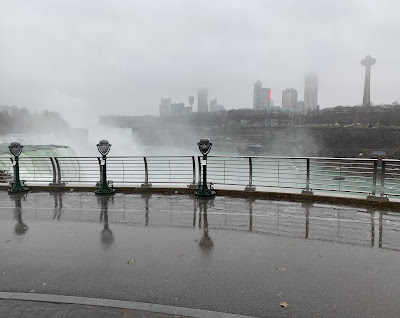 Sean has now created a website, THE MYSTERIARCH (great name), where he will be sharing his findings and research adventures. I just love "Houdini archeology" and I can't wait to see what he discovers next.

UPDATE: You can now read Sean's own report with additional pics HERE.

Email ThisBlogThis!Share to TwitterShare to FacebookShare to Pinterest
Tags: [History], 1921, Filming locations, Niagara Falls, The Man From Beyond (1922), Then and Now, Video