Did Smithsonian land a punch or poison the well? 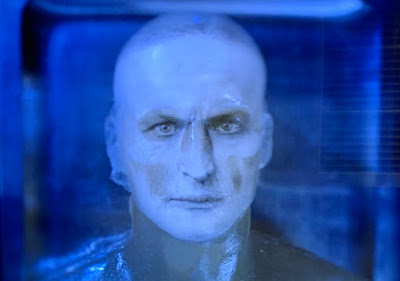 By now those who are interested have probably watched the Houdini episode of The Curious Life and Death of... which aired last week on the Smithsonian Channel. Typical of these shows, it offered a salacious blend of pseudo-history, conspiracy theories, and insinuation, coupled with lots of ominous music to tell us how serious all this is. And why drag poor Bess into it!? It's also important to point out that George Hardeen did not "file a petition" to exhume Houdini's body in 2007 as the show claims. This was a publicity stunt organized by others and a serious error on the part of the writers of this episode. [If you want to dive back into all that, check out my related link below.]
However, there is still plenty to enjoy here. I'm a sucker for the graphics these shows cook up (such as the one that tops this post). The host, Dr. Lindsey Fitzharris, seems nice and appears sincere in her work. Author Joe Posnanski did a great job being the key interview for Houdini's biography. And we see some nice photos and film clips.
The episode also featured an interesting piece of Houdini history that struck me as new. (I've since learned it was discussed in the comments of this post at HHCE.) Apparently, Houdini was injured doing a straitjacket escape at a charity show in the summer of 1926. This is presented as the first of the series of unfortunate events that would end in his death. We see two on-screen sources for this accident, the first being part of a newspaper story: 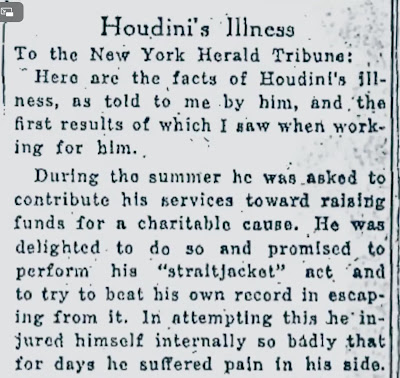 The second source is a letter by Gertrude Hills written to Sir Arthur Conan Doyle on November 22, 1926. Hills closes with a mention of this same accident:

If you do not know what caused our friend's death, you will be interested to learn that he injured himself this summer while presenting for charity his straight jacket act. The injury was not taken seriously by himself, or his physician, I imagine, since the pain resulting from it was diagnosed as forms of "indigestion."

Unfortunately, the show didn't specify when this "summer" charity show took place, and I have no match in my chronology. But I'm reminded of this post which suggested Houdini was under the care of a physician during a charity event in September 1926. Related?
Something else that struck me as new was the mention of a "high society spiritualist" named Madame Marcie who accosted Houdini after his D.C. hearing, predicting he would be dead by November. This nugget of info is dropped by the show's crime expert, former detective Brian Hook, who delivers many of the show's more salacious assertions, such as his belief that Bess may have killed her husband for the insurance money. Oh my.
Okay, but what of the show's core premise that Houdini might have been murdered?
While I do not believe the age old claim that Houdini's doctors poisoned him with experimental serum, I'm not averse to the idea that Houdini could have been slipped arsenic or some other poison by fanatical spiritualists on one or more occasions. Of course, evidence would be nice. Right now there's only speculation. But I don't find it impossible and I'm open to any serious investigation. Heck, I'd even support exhumation if some new evidence compels it. (Curiously, the show didn't mention Bess's attack of food poisoning, which is the one place I see smoke.)
So as far as advancing the murder theory, The Curious Life and Death of... provides nothing new and maybe even sets things back by flogging silly conspiracy theories. But as a dose of superficial yet entertaining Houdini-themed TV, it gets the job done. 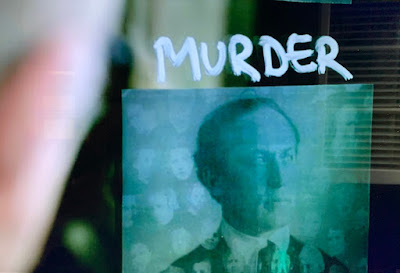 You can stream The Curious Life and Death of... on HULU, iTunes, and Amazon Prime.
Related:
Written by John Cox at 9:35 AM