Last weekend a challenge handbill sold at Haversat & Ewing Galleries latest magic auction for $1,404.00. This is more than three times what challenges typically fetch. But that could be because this is a very special challenge. This documents the second challenge from the Weed Chain Tire Grip Company in 1908. Houdini had beat a Weed Chain test in New York on April 10th. But the company felt they could do better and followed him to Philadelphia with more chains and new conditions, as you can read below. 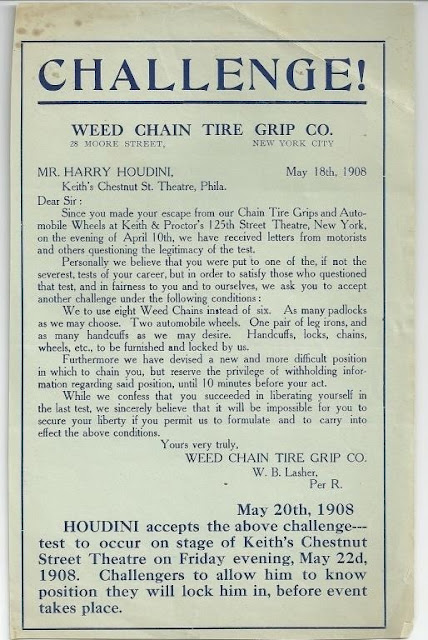 While I knew Houdini had repeated the challenge in Philadelphia, I never knew the date nor details. But this provides both! This challenge was said to have created an even bigger sensation than in New York as it was reported via ticker tape "in the same manner as every great sporting event."
Below is a photo of Houdini confined in the Weed Chains taken at the White Studio around the time of his first test. This became one of Houdini's most widely used publicity images and it's likely the reason the Weed Chain challenge is so well-known today. But is there a photo of Houdini in the second test configuration? One wonders how more chains could be added to this!

Below are links to more Weed Chain challenge info and images.
Related:
Written by John Cox at 11:45 AM