Houdini and David Copperfield will be simultaneously inducted into The National Museum of American Jewish History's Only in America Gallery/Hall of Fame in a special livestream event on Saturday, December 12, 2020. Below is the full press release. 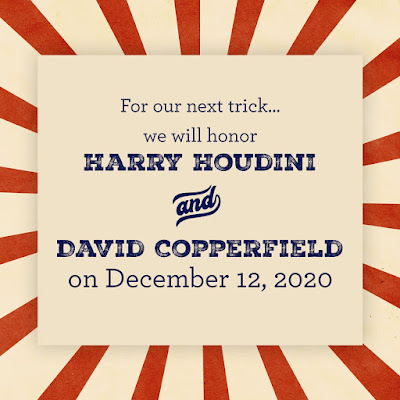 ILLUSIONISTS DAVID COPPERFIELD AND HARRY HOUDINI TO BE INDUCTED INTO NATIONAL MUSEUM OF AMERICAN JEWISH HISTORY’S ONLY IN AMERICA® HALL OF FAME
Copperfield Will Accept the Honor from His International Museum and Library of the Conjuring Arts Which Houses the Largest Collection of Houdini Artifacts in the World
The Philadelphia Museum’s Virtual Gala Will Take Place on December 12, 2020
PHILADELPHIA, Pa. (October 22, 2020) – The National Museum of American Jewish History announced today that the two most famous illusionists of all time, Harry Houdini and David Copperfield, will be simultaneously inducted into its Only in America® Gallery/Hall of Fame during the Museum’s annual gala—a virtual event scheduled for Saturday, December 12, 2020.
An honor bestowed to just 21 prior inductees, including Ruth Bader Ginsburg, Steven Spielberg, Barbara Streisand, Emma Lazarus, and Irving Berlin, the award recognizes the achievements and contributions of American Jews who share and exemplify the ideals of the stories explored in the Museum.
“We are thrilled and grateful to be able to induct Harry Houdini and David Copperfield into Only in America at the same time,” said NMAJH Trustee and Gala Chair, Sharon Tobin Kestenbaum. “The kinds of ‘Only in America’ stories we explore in the Museum are in great part about the legacies created for future generations. With this event, we are able to celebrate a cross-generational story. From immigrant Harry Houdini to first-generation American David Copperfield, this event clearly demonstrates what’s possible when individuals are simply given the chance to be great.”
Both magicians share a passion for the history of magic. “David Copperfield cares deeply about the history of his craft—his desire to know and preserve that history is something that resonates strongly with us as a history Museum,” added NMAJH CEO, Dr. Misha Galperin. “Museums and magic actually have a lot in common—they are about storytelling at their core, and are designed to intrigue, inspire, and spark wonder.”
Copperfield will accept the honor from his International Museum and Library of the Conjuring Arts in Las Vegas, Nevada which houses the world’s largest collection of historically significant magic memorabilia, posters, books, props, artifacts, and is home to the largest collection of Houdini artifacts including his Water Torture Cell, Metamorphosis Trunk, as well as the only known recording of Houdini’s voice—preserved on the original Edison wax cylinders.
To date, David Copperfield has earned 21 Emmy Awards, 11 Guinness World Records, is a recipient of the Living Legend honor by The Library of Congress, and has sold more tickets than any solo performer in history. Born David Seth Kotkin in New Jersey, his mother came from Israel and his father’s parents were born in Russia. Copperfield was invited to join the Society of American Magicians at just 12 years old—its youngest member ever. One of David’s proudest achievements is Project Magic, a program that uses magic as therapy in 1,000 hospitals in 30 countries worldwide. This medically certified program motivates patients to regain their dexterity, coordination, and cognitive skills by learning simple magic and sleight of hand.
During the virtual event, Copperfield will himself induct Harry Houdini. Born Erik Weisz in Hungary in 1874, Houdini came to America when he was just four years old. He toiled at odd jobs as a young man and son of a Rabbi who struggled to make ends meet for his family before becoming the legendary illusionist we know today, touring across America and Europe and drawing audiences of thousands. He had little in the way of formal education and self-educated himself on the history of magic, amassing a large collection, and confronting the scams of his day with historical evidence. His death-defying feats and daring work as an escape-artist set him apart from all other performers of his time. He continues to inspire generations of magicians.
Last fall, U.S. Supreme Court Justice Ruth Bader Ginsburg became the 21st inductee into Only in America. She joined an iconic group of living and posthumous inductees which includes Irving Berlin, Leonard Bernstein, Louis Brandeis, Albert Einstein, Gertrude Elion, Mordecai Kaplan, Sandy Koufax, Estée Lauder, Emma Lazarus, Isaac Leeser, Golda Meir, Julius Rosenwald, Jonas Salk, Menachem Mendel Schneerson, Rose Schneiderman, Isaac Bashevis Singer, Steven Spielberg, Barbra Streisand, Henrietta Szold, and Isaac Mayer Wise.
The award recognizes the achievements and contributions of American Jews who have significantly impacted American society and culture, often despite facing antisemitism and prejudice. The inductees embody hard work and aspiration, courage and imagination, leadership and service. Located on the first floor of the Museum, the Ed Snider Only in America® Gallery/Hall of Fame brings these stories to life through a combination of original artifacts, original films, and multimedia elements.
Virtual Gala
Tickets will go on sale later this month. The event is open to the public and will be a can’t-miss experience for anyone who loves the awe-inspiring wonder of magic. All are welcome to partake in a night of surprise and amazement at this once-in-a-lifetime event honoring the legacy of Harry Houdini and living legend, David Copperfield. Sponsorships with exclusive benefits available.

Congratulations to these two masters of magic! 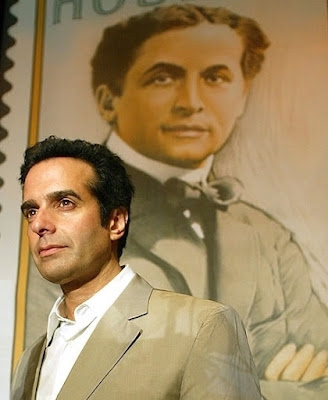