Novelizations are movies written as novels and released as tie-in merchandise. Before home video, novelizations were the best way to "own" a movie and revisit it whenever they like. Novelizations date back to silent era and can be collectible. There are a rare novelizations of King Kong and Bride of Frankenstein, and the novelization of Star Wars was released six months before the movie, making that first edition desirable.
But what does this have to do with Houdini? Well, there have been some Houdini novelizations. Not as many as one might hope (no Tony Curtis movie novelization, dang-in), but enough for a little Wild About Harry Bookshelf retrospective. So away we go!
The Master Mystery
Yes, Houdini's 15 episode movie serial, The Master Mystery, was novelized by screenwriters Arthur B. Reeve and John W. Grey. Released in hardcover by Grosset & Dunlap in 1919, it has become a hot collectible, especially in its original dust jacket. The book also contains photos from the movie. Before The Master Mystery appeared on VHS this was the only way to experience the serial and it remains an excellent way to research missing scenes.
Here's a sample of the book describing Houdini's (a.k.a. Quentin Locke) straitjacket escape: 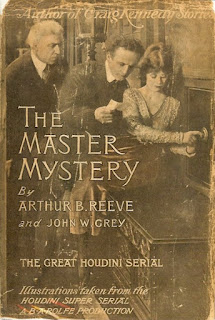 Locke struggled with superhuman effort to release himself from the straight-jacket in which he was held prisoner. The throat-straps pressed against the neck muscles and the strain on the straps could be heard like pistol-shots as the leather stretched his prodigious effort.

With every nerve keyed up and his reflexes answering his keen brain, he swayed backward and forward, rolled from side to side until his shoulder blades were thrown completely out of joint. The pain was intense, but he summoned every ounce of strength at his command and finally succeeded in getting one of the arms free by gradually working his body toward a settee, where, with his elbow on the seat, he pushed his disjointed arm over his head.

Agony was written all over his face as at last with a final effort he extricated his arms and was in a position to loosen the straps which bound them, with his teeth.

Nor was his labor over now. The canvas jacket cut into his flesh and the buckles bruised his muscles. His body ached with weariness, yet he clung to his task. Like a thing incarnate he toiled as he realize the danger that in confronted Eva.

Now in public domain, The Master Mystery novelization has been reprinted several times, including as part of "The Arthur B. Reeve Detective Series" in 2006 and as an eBook and audiobook. 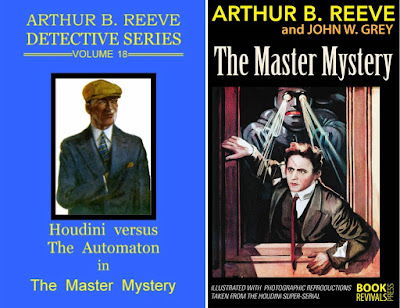 Terror Island
While it never appeared in book form (to my knowledge), Houdini's 1920 feature Terror Island was adapted into an 8-part story that appeared in the May 14, 1921 issue of Boys' Cinema Weekly. Joe Notaro uncovered this rarity in 2018 and reprinted the installments at Harry Houdini Circumstantial Evidence. 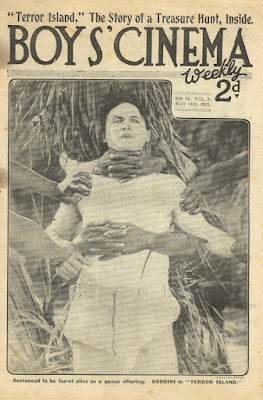 It's a shame we didn't get novelizations of Houdini's other movies.
The Great Houdinis
It was many years before there was another Houdini novelization, but then came The Great Houdinis by Melville Shavelson, published by Fawcett books in 1976. This is a novelization of the ABC television movie starting Paul Michael Glaser and Sally Struthers. It's a terrific novelization and a real pleasure to read. It also contains a few cuts scenes.
Here's the opening of the book which gives a good taste of Shavelson's prose: 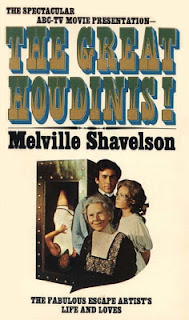 Two women walked along the pathway between the crowded headstones, the wind blowing the autumn leaves about their feet, rain dripping from the trees, a damp chill adding to the gloom. One of the women was Bess Houdini, older now, but still Bess. Sadness had touched, but not crushed her. She wore a cloth coat bundled about her, a scarf knotted firmly at her neck, a hat and gloves, and in her hand she carried a small cluster of roses, out of place here, because this was an Orthodox Jewish cemetery where the a customary offering is a pebble. But Harry Houdini was no ordinary tenant, and even after his death he was treated as a headliner; whatever he wanted backstage was okay with the management. 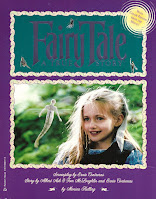 Backstage in the dressing room, Sir Arthur Conan Doyle, a famous author, was waiting for Houdini. Sir Arthur was very interested in communicating with spirits. Houdini had once dazzled Sir Arthur's daughter by making an apple appear out of thin air. "Never try to fool children," Houdini had told the audience. "They expect nothing and, therefore, see everything."

It's too bad the movie did not also receive proper novelization, but it appears tie-in merchandise for this movie was all aimed at children.
Death Defying Acts
It's surprising that a movie which barely received a release (one week in Los Angeles and New York) would be novelized, but that is what we have with Death Defying Acts by Craig Cox. The novelization appeared as a trade paperback from Pocket Books in 2008. As far as I know it was only released in the U.S. Here a sample from Chapter 1: 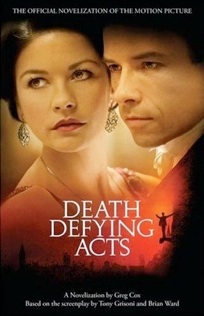 Stay calm, Houdini reminded himself. As always, his chief task at such moments was to conquer fear, to retain his wits and faculties despite his alarming circumstances. Even shackled from head to toe, and plunging swiftly towards a watery grave, it was necessary to maintain an absolute serenity of spirit. If I panic, I am lost....
He held on tightly to his breath. Years of practice and conditioning has expanded his lung capacity until he go without breathing for three minutes or more. Cold water leeched the heat from his bones, yet the chill had little effect on him. He routinely bathed and tubs of ice water to inure his body against the shock of sudden immersion. Indeed, he had become accustom to a cold bath every morning and seldom enjoyed going without one. Sydney Harbor was not exactly warm this afternoon, but he had attempted this stunt in far cooler waters. Detroit, back in November of '07... now that had been cold.

Not to be nit-picky, but the "Detroit stunt" was actually 1906. But, hey, we don't read novelizations for the facts. These are for fun.

For more about novelizations, check out this 2014 Vanity Fair piece, Yes, People Still Read Movie Novelizations . . . And Write Them, Too.

Other selections from the WILD ABOUT HARRY bookshelf:
Written by John Cox at 8:28 AM