A Houdini Séance in the time of Covid

Normally this time of year I'm scrambling to keep track of all the various Houdini seances and Halloween events that fill the October calendar. But so far the only public event of which I'm aware is this exclusive Houdini Séance in Chicago organized by mind reader Jacob Mayfield. The event is going forward with Covid safety measures in place, and both seatings are SOLD OUT. But I still wanted to give them a shout out. Maybe being the lone seance will improve their chances of contacting Harry!

Harry Houdini died on Halloween 1926. The next year his wife Beatrice hosted a seance in an attempt to contact America’s most famous magician. Every year since, members of the magic community have gathered by candlelight in an attempt to make contact with Houdini. This Halloween, join us as we invite a select group of 13 to join Jacob Mayfield in an exclusive Houdini Séance. This event will include a brief discussion about Houdini’s complicated relationship with Spiritualism, a demonstration of some of the era’s spookiest magic, and will culminate in a traditional Victorian table seance.

Jacob will be discussing his seance and Houdini this Wednesday, October 14, on the Ghostly Podcast. 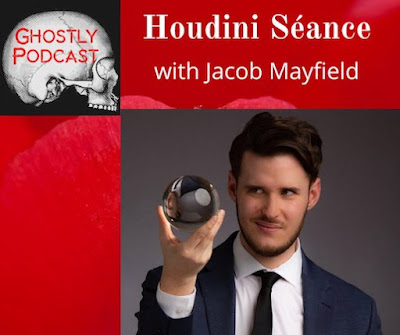 I'm currently working on a post about the (true) origins of the annual Houdini seances. Below are links to some notable Houdini seances of the past.
Related:
Written by John Cox at 1:49 PM