Houdini's return to burlesque in 1912

During his struggling days, Houdini co-founded and managed a traveling Burlesque show called "The American Gaiety Girls." It was a failure. Many biographers have suggested that Houdini's somewhat prudish sensibilities were ill-suited for the world of Burlesque.

Until now, I would have told you that was Houdini's only experience with Burlesque. But recently I found these remarkable clippings that show Houdini joined with the popular "Bowery Burlesquers" for a one-week engagement at the Gayety Theater in Washington, D.C. in February 1912. I'll let the clippings tell the story themselves. 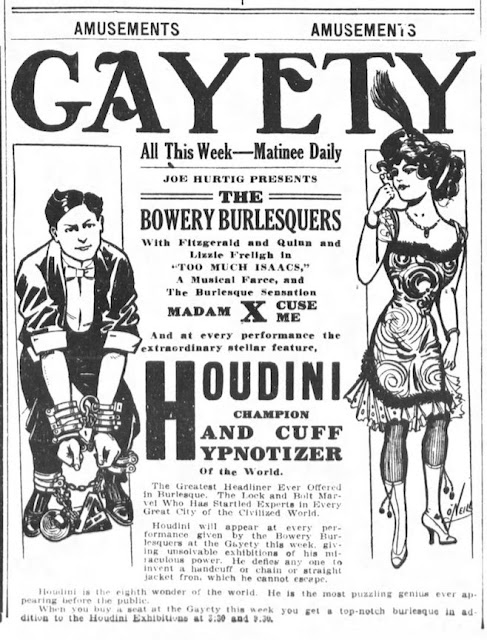 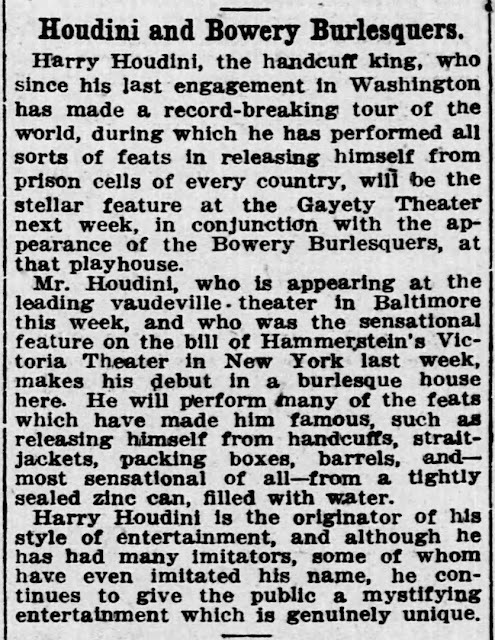 Papers reported that Houdini was engaged because "the theater manager wanted to give its patrons and unprecedented treat" and cautioned that "the extraordinary drawing powers of Houdini are not to be taken as an indication that the Bowery Burlesque entertainment is impaired. That organization is one of the most popular on the burlesque wheel."

One suspects the company made Houdini an offer he couldn't refuse. In fact, special perks may have been part of the deal, if this ad in the February 13, 1912 Washington Post is any indication.

During this week, Houdini escaped from Spanish Inquisition irons from the Washington D.C. War Museum. Papers reported that, "if the weather permits it is probable that he will dive from one of the bridges of the Potomac river." (He did not.)
After a highly successful week, Houdini returned to the Keith's circuit. As far as I know, he never performed in a burlesque house again. It was clearly not for him. In a telling diary entry made during his Gayety run he wrote, "I did not [let] Ma come to Theatre as I was ashamed to let her see the class of show I was with, especially after having shown her all the big Keith Time houses."

UPDATE: Here's an item from the February 5, 1912 Atlanta Constitution that shed a little more light on why Houdini accepted this engagement. 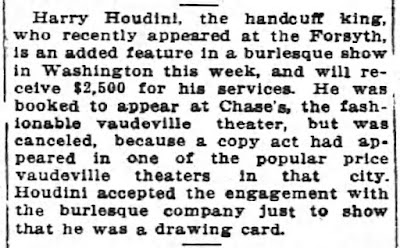