The greatest Houdini auction ever

I just purchased a November 1980 issue of Magicol magazine for the terrific cover photo of Houdini and his Humber motor car (more on the Humber later this week!). But it is the article inside, "Houdini's Last Sale?", that really blew my mind.

The article is by Houdini collector Mario Carrandi who reports on what I believe was the greatest Houdini auction ever. No, I'm not talking about the big Sid Radner, Manny Weltman, or Christopher collections auctions (which offered collectors no bargains, that's for sure), but a little known 1980 auction of Houdini's own personal artifacts that had somehow remained undiscovered in the basement of 278 for over 50 years.

Intrigued? It gets better...or worse, depending on how you look at this.

The Bonnano family purchased 278 from Bess in 1927. Rose Bonnano lived in the house until her death in the 1970s. After she died, her sister-in-law cleaned out the house and discovered "several trunks and cases," as well as framed wall photos and furniture, all which had belonged to Harry and Bess Houdini. Included in the find were scores of original posters, lobby advertisements for his films, handcuffs, advertising material, books, a scrapbook, and even a brass bed. It added up to 110 lots of never-before-seen Houdini material.

The amazing find was consigned to Howard E. Wikoff's New Jersey Auction Service. The auction was only advertised with a small advert in the June 6, 1980 The New York Times Sunday edition (above), and was held at the Church of the Guardian Angel in Allendade on June 13, 1980. Despite the lack of fanfare, the major Houdini collectors of the day were on hand along with about 200 bidders and spectators.

What was sold (and unsold!) that day, and the prices realized, is truly unbelievable to modern collectors. Houdini's scrapbook sold for only $250. Original sepia photos of Houdini, Bess, Hardeen, Mama, etc. sold for about $150 apiece (with Mario nabbing most of them). Two framed pictures of Houdini's parents, which presumably had hung on the wall of 278, sold for a paltry $40 or $50 apiece. "The frames alone were worth it," notes Mario. Handcuffs sold for about $250 apiece, and a letter sold for $150, which at the time Mario considered "terribly overpriced." Ha!

Mario didn't report how much the original posters sold for, but he notes there were about 20 posters from between 1912-1915, including a Milk Can poster (one of these sold in 2005 for the record price of $78,664) and an unpublished poster of "a young Houdini shackled with a red background". All were in beautiful condition. Unfortunately, the auctioneer glued all but two of them to plywood with Elmer's Glue because he thought that would give them "flea market flair." Ouch!

Mario came away with 15 of the 20 posters, as well as some hand colored lobby advertisements for The Man From Beyond. He also bid against escape artist Steranko for this beautiful framed 50 by 40 inch hand lettered portrait, getting it for $1,500. 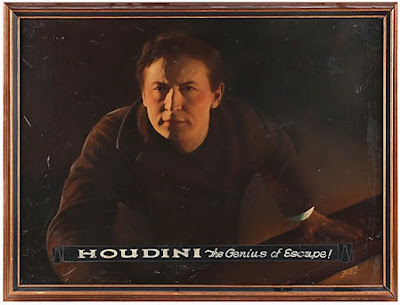 Incredibly, "a giant framed photo" of Rabbi Weiss, several original sepia pics of Bess and Mama, and the brass bed did not sell. I'm especially interested to hear 278 contained two pictures of Rabbi Weiss. I only know of one photo of Houdini's father. Does this mean there's another out there?

Houdini's desk, which had been used during seances inside 278, was sold privately.

Mario estimated the total auction added up to $12,000. Heck, that's what a single Houdini item sold for in a recent Martinka auction.

What a mind-blowing find, and what an incredible opportunity to acquire some true Houdini treasures before the insanity of price inflation hit the Houdini market. But what I love most is these were items that were personal to Houdini. To own his own portraits of his parents that hung on the walls of 278...incredible.

What kills me is I was a full-blown Houdini fanatic in 1980 with a father who encouraged me to seek out some good "Houdini investments." If only I known about this auction...

Just thought I'd share the pain.
Written by John Cox at 7:52 AM