What Sid told me 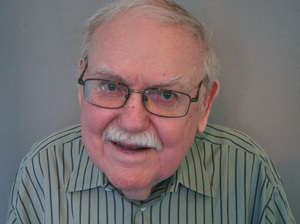 Sidney H. Radner, who passed away last month at the age of 91, never wrote a book about Houdini. But he was happy to share his insider knowledge with fans and fellow collectors.

In September 1998 I traveled to Appleton, Wisconsin, for a Houdini weekend event and had the great fortune to meet and chat with Sid. Afterwards, I jotted down some notes on what he told me. Not long ago I dug out those notes. While they are just random fragments, there are some intriguing fragments indeed.

What I offer here are those notes with my own comments in brackets. My hope is these precious nuggets from the late great Sid Radner will spur fresh research and lead to new discoveries.

Conversation with Sidney Radner on Sept. 5, 1998 in the lobby of the Paper Valley Hotel and Conference Center, Appleton (~10:45PM to 2:45AM). NOTES by John Cox.

Sid has met Jim Collins and says he was interviewed. [Whoa, really!? Where is this interview, I wonder?]

Larry Weeks has a copy of The Grim Game, but will not let anyone view or copy it. [Unfortunately, all too true.]

Re the Water Torture Cell: It came apart for shipping. Several pieces. Fit into nice custom-made boxes lined with velvet. It had two extra plates of glass (which still survive). Stocks were VERY heavy.

Two Torture Cell cages existed, one with bars vertical, the other with bars horizontal. Henry Muller "lost" the cage. He also lost the top of a Milk Can. (Sid emphasizes, “He’s my friend.” But is clearly irritated by this.)

Hardeen was trying to build a new Water Torture Cell to teach Sid how to do it at the time of his death. [Patrick Culliton recently revealed the existence of this second cell in his book, Houdini The Key.]

Houdini had an interesting replacement ready for the USD. A box within a box within a box type of thing. Not death defying. More mysterious. Hardeen was excited to show Sid this. [This was baffling to me at the time, but I now know Sid is most likely talking about this.]

USD will be restored “better than new.” Some metal remained. A little wood (to match). [And it was.]

Sid met Bess once. She hooked up with a man after Ed Saint's death in a “story not yet told.” [Whoa!]

Impression that Bess was a bit of a wild card after HH death. Both Sid and Hardeen thought she hooked up with all kinds of con artists and weird people.

Rose Mackenberg, Houdini's spiritualist “agent”, said Houdini was a “perfect gentleman” and that she punched him as a test of his strength. [!]

Rose was an attractive 25 when Houdini hired her.

Rose told Sid that mediums would “grope” her in the dark, and some would lead her to the bedroom so her dead husband could once again show his love (though the medium, of course).

Houdini would instruct Rose to count the number of stairs leading up to the front door, the windows on the first floor, then leave a chalk mark on a stairway. When he exposed the medium from the stage, should they deny Rose’s visit, Houdini would point out these facts. This was in Chicago.

Sid likes to say, “We created Marie Blood.” [I believe he means they discovered Marie?]

HHC [Houdini Historical Center] has the complete Lib of Congress microfilm on file.

Sid was at the HHC when he learned of the fire at the Houdini museum in Canada.

Hardeen's kids were angry at Houdini because it specified that they would only receive their $500 inheritance if they were circumcised (they weren’t). Elise was not Jewish. All the brothers married outside of the faith.

George Hardeen is still alive and living in Arizona. He writes for a horse magazine.

Houdini wrote for some Jewish periodicals. [Have these writings been discovered?]

Hardeen was writing a book about Houdini when he died. He had borrowed the #1 scrapbook from Sid and had it at the time of his death (Sid was in the Army in India).

Walter Gibson found he couldn’t write a bio of Houdini – too "overwhelming." [Too bad.]

Margery’s relations (kids?) thought she was a big fake and a “jerk.”

[Ruth] Brandon came to see Sid after she completed her book [The Life and Many Deaths of Harry Houdini] – if it didn’t jive with her info she “turned the page.”

Sid has nothing good to say about [Bernard] Meyer or his book [Houdini A Mind in Chains]. “They don’t understand show business.” Sid says the guy who painted the milk can poster could have been the one with a womb fixation. (funny)

And last but certainly not least...

When conversation turned to mother, Sid said he “saw something once…” (that would give great insight into their relationship), but then he trailed off and would not tell me, saying it was "too personal." [Damn!]
Written by John Cox at 9:08 AM