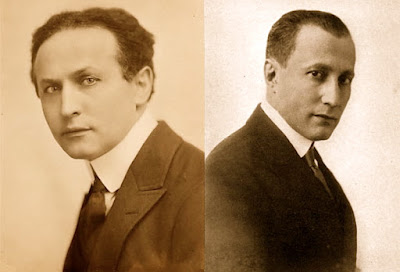 Feels like we've had a lot of somewhat sensationalistic blog posts lately (murder theories, reincarnation), so here's my attempt to get back to something more rooted in real research and within my own specialty; Houdini's movies.

While doing research last year at the the Academy of Motion Pictures Arts and Sciences Margaret Herrick Library, I uncovered a revealing letter from Houdini to Adolph Zukor. Zukor was the head of Famous Players-Lasky/Paramount Pictures, and a powerful Hollywood mogul. He revolutionized the film industry by organizing production, distribution, and exhibition within a single company, and by the 1920s dominated the industry with a theatrical chain of nearly 2,000 screens.

Zukor had produced and distributed Houdini's two Hollywood features, The Grim Game and Terror Island. Now here we see Houdini attempting to interest Zukor in his first independently produced feature, The Man From Beyond. On Houdini Picture Corporation stationary he writes:

Tried to get you on the 'phone a number of times this week but unfortunately failed to do so. Am starting on my second super special. My first production "The Man from Beyond" is finished and is a competitive picture to "Way Down East," referring to the thrill finish wherein we have our episode on the brink of Niagara Falls. Would like to make arrangements to show you this picture any time to suit your convenience and any place you designate.

May I suggest the possibility of bringing it to your home and running it as you did "The Grim Game." As I stated above, I am working in the day time on my next picture but I could come out any evening on Sunday. "The Man From Beyond" is a full seven-reeler and really believe I have a great, big financial success.

We took six months to make The Man from Beyond.

What's Houdini up to here? You could say he's trying to join the "producers club" by showing off his first feature to Zukor. But I think it's much more likely that he's soliciting Zukor here, hoping that Paramount might be interested in distributing The Man From Beyond (this is a full year before the film's release). Houdini clearly seems to be trying to entice him with the idea of "a great, big financial success." Also his likening the film to Way Down East (which he would continue to do in publicity), might be strategic, as that film was D.W. Griffith's first production for Paramount's competitor, United Artists.

But it's also clear that Houdini is not having much luck, failing to even get a return phone call. One can't help but sense a bit to wistfulness when Houdini mentions the screening of The Grim Game at Zukor's home.

So why is Zukor snubbing Houdini? It's possible Zukor felt he had already exploited Houdini the movie star to the maximum with The Grim Game and Terror Island. Certainly the returns and reviews on Terror Island showed diminishing interest in Houdini as a film star. Or maybe Zukor now considered Houdini, the producer, as competition, and didn't care to have a relationship. It's also possible Zukor did screen The Man From Beyond and didn't care for it.

Whatever the reasons, Paramount would not distribute The Man From Beyond. Houdini would instead distribute the film himself under the Houdini Picture Corporation banner. For his last feature, Haldane of the Secret Service, Houdini would turn to FBO for distribution.

But the fact that Houdini even solicited the movie to Zukor is a fresh revelation, and just another intriguing nugget from the still largely untold story of Houdini and his movies (a story I'm working to one day tell). 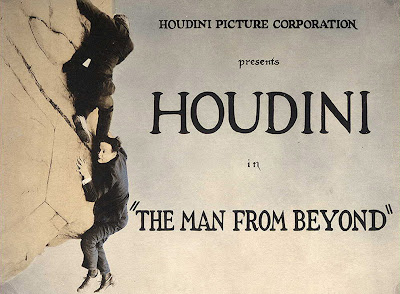